Monday 02, 03 2020
The number of deaths due to coronavirus is too small to affect the global economy, yet the fear it strikes is enough to shake the world. 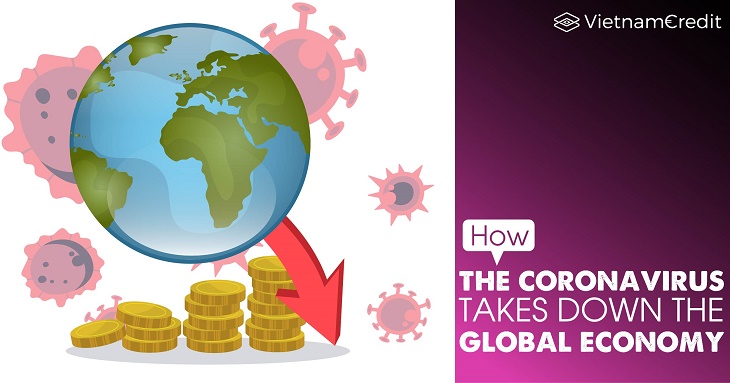 "The body's immune response to infection is usually more painful than the infection. The same is true of the coronavirus disease and the economy," the Wall Street Journal commented.

Instability due to fear

Similar to terrorist attacks and financial crises, the epidemic results in widespread instability, and sometimes even crisis. Governments and individuals tend to react with a shocked mentality, thus increasing its impacts on the global economy.

For example, the US stock market dropped sharply on Monday (26th February) due to fear of the virus spreading to other countries. Based on its health impacts only, the coronavirus is not a major problem for the global economy.

By 26th February, it has killed 2,618 people, mostly in China where the newly-infected rate has nearly reached its peak. In comparison, the Sichuan earthquake in May 2008 killed more than 69,000 people without causing any significant damage to China's development.

The difference in this situation is that the scale and the seriousness of an earthquake are more limited and clearer than those of a virus. And in this case, Chinese officials do not have any other option. They have had to quarantine 60 million people in Hubei, delaying the economic activities.

The US has warned its citizens against traveling to China and prohibited the entry of people without American citizenship who has been to China in the last 14 days. In Korea, this disease, until now, has killed fewer people daily than common flu has.

However, the number of customers coming to movie theater nationwide has dropped by 38% over the same period last year. “The fear of the virus is spreading nationally, with a much faster speed than the virus itself”, Citigroup’s experts stated.

Because of the epidemic, instead of common assistance, many countries have decided to close their borders. Authorities have easily decided to raise the commercial and travel barriers to control the expansion of the disease. Thus, the coronavirus is officially a setback of globalization. Epidemiologists say there has not been a precedent for such a drastic response. “According to the public health tradition, known interventions which could slow the disease down are diagnosing, home or hospital quarantine, medical staffs protection, etc.”, Tom Inglesby, Director of the Medial Security Center of Johns Hopkins University said. “Large-scale solutions such as those used by China are unprecedented”.

Because there has not been any data related to micro-interventions such as city lockdown, the travel ban from a part of a country or from a country itself, until now, the effects and negative consequences of these are all assumptions.

“We have shifted from confidence to crisis and acted without basing on evidence, thus damaging the economy severely”, Lawrence Gostin, director of the O’Neill Institute on National and International Law at the Georgetown University, said.

According to him, the quarantine of Americans living in infectious areas such as on a traveling yacht is reasonable. However, a travel ban applied to all foreigners which could be easily widened without notice damages the economy and tourism.

Goldman Sachs estimated that the US economy in the first quarter of 2020 would lose 0.8 percentage points due to losses caused by the decreased tourism, the export, as well as the delay in the supply chain. Peter Berezin, the Global chief strategist at BCA Research, estimated that the global growth would drop to 0 in the current quarter of 2020 and then recover, with a yearly growth loss of 0.5 percentage points.

However, it is important to note that the two impact estimations of the Covid-19 and other estimations, until now, have all been assumptions.

Running out of solutions

The US Federal Reserve may respond to the risk of the US economic recession (if any) due to disease by cutting interest rates. Fed officials are following the situation and acting carefully in the context of the evidence of economic losses. They hold the view that any influence is only temporary.

Even if they cut interest rates, the effect will be limited. Interest rate cuts boost demand for goods and services, but the problem now is whether workers and businesses can supply them. After the September 11, 2001, terrorist attacks, the US economy plunged with fear of more terrorism.

Another problem is that in both the 2001 and the 2007-2008 recessions, the Fed had slipped about 5 percentage points. Currently, they can cut a maximum of 1.75 percentage points before hitting 0. Finally, it is still unknown how policymakers will respond to global economic fluctuations in this epidemic.

The United States and its allies cooperated in 2001 to defeat al-Qaeda and in 2008 to stem the financial crisis. However, nowadays, that spirit of cooperation is threatened by trade wars and the US’s readiness to act unilaterally.