Vietnam's Economy Is Doing Well - Despite The Global Trend

Wednesday 18, 12 2019
Vietnam's middle class is also on the rise. Investment by enterprises in the private sector also increased by 17% over the same period. 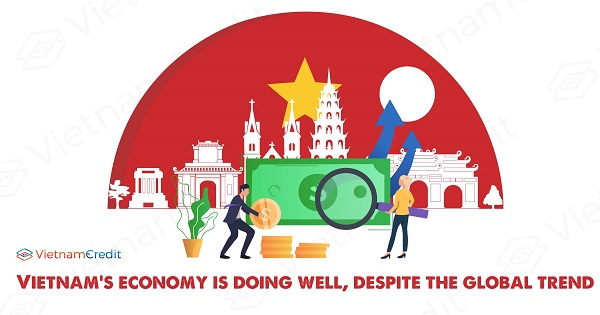 "Vietnam continues to have an impressive year," said Ousmane Dione, Country Director of the World Bank in Vietnam, at a press conference in the afternoon of December 17. The organization forecasts that the economy of 96 million people will grow at 6.8% in 2019.

The economic figures of Vietnam

Vietnam's economy is assessed to have achieved positive results in 2019 with an estimated GDP growth rate of 6.8%. Public debt has decreased by 8 percentage points of GDP compared to 2016 and trade has been in surplus for four consecutive years.

"These are impressive results in the context of a global economic slowdown," the World Bank said. Visually, the organization describes: “Dark clouds continue to pull on in the global economy with lower economic growth and trade flows than expected for 2019, however, the sun is still shining above the Vietnamese sky.”

According to a World Bank report published today, this organization once again affirmed the resilience of Vietnam's economy. Accordingly, GDP growth is maintained thanks to a strong external economy, with exports expected to increase by 8% in 2019, an increase of 4 times higher than the average in the world.

Vietnam continues to be an attractive destination for foreign investors, with an average of nearly US $3 billion in committed FDI inflows. Also, individual consumption by households is an increasingly important factor contributing to GDP growth. Vietnam's middle class is also on the rise. Investment by enterprises in the private sector also increased by 17% over the same period. The World Bank believes that in the near and medium-term, Vietnam's GDP will be around 6.5%. The basic elements of Vietnam's economy remain strong, the Government has created certain fiscal gaps through prudent fiscal policy.

There are still plenty of challenges

However, Vietnam is still not fully immune to external shocks. The most evident is the export growth decreased by 21% to 8% from 2017 to 2019. Export growth decreased even more clearly when looking at the export market outside the US, increasing only 3.6% in 11 months of 2019. FDI into new business facilities also slowed down by 30% compared to the previous 2 years, even after taking into account the M&A channel.

Considering the above-mentioned external risks and, at the same time, to provide additional growth motivation for the economy, the World Bank recommends that the development of a strong and dynamic private sector be prioritized. However, many businesses operating in the country are still facing major obstacles and limitations, in which the World Bank pays attention to access to credit. "Addressing the constraints on financial mobilization for businesses needs the highest level of attention from policymakers if Vietnam wants to continue its rapid and inclusive growth, towards becoming a high-income country in the coming decades," Ousmane Dione emphasized.

Keep reading: The Vietnamese economy in the first 8 months of 2019