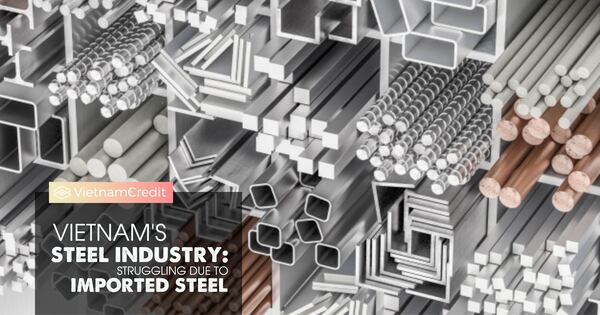 US-China trade tensions have affected the global economy, and the supply and demand of iron and steel industry. A giant in the field, ArcelorMittal, has had to reduce production by 3 million tons while U.S. Steel has announced stopping production of 2 blast furnaces.

On the contrary, the output of iron and steel factories in China, India, Russia has not decreased but increased. When the domestic demand is not high, most of the steel produced in these countries is exported to other markets, including Vietnam.

According to the General Department of Customs, in the first 9 months of 2019, iron and steel imports increased by 4.6% in volume over the same period in 2018, reaching 10.81 million tons, worth USD 7.21 billion. Prices of iron and steel imported into Vietnam in the first 9 months decreased by 8.2% compared to the same period in 2018. To be more specific, China, South Korea, Japan, India, Russia are countries with the largest imported steel volume into Vietnam. In order to consume the amount of hot rolled steel produced, within the last half year, India and Russia have reduced selling prices by more than 20%. Previously, India exported about 70,000 tons of steel per month to Vietnam, while now the figure has increased sharply to more than 200,000 tons / month.

The decline in hot rolled steel price means that the price of cold rolled steel, galvanized steel and steel pipes decreases as well, which affects the production and consumption plan of the domestic steel industry. Many factories have suffered losses due to lower prices on inventories to compete with cheap imported steel.

Facing competitive pressure from cheap imported steel, Formosa Ha Tinh's production output has dropped. While in July 2019, Formosa's hot rolled coil production reached about 350 thousand tons, it was only about 300,000 tons in September.

Steel industry is a heavy industry, which is the basis of each country. Steel products are the main supplies and raw materials of many important economic sectors including mechanics and construction. If the steel industry suffers from negative growth, it will affect the overall development of the economy. Therefore, the Government should soon take appropriate and timely measures to promote the development of the domestic steel industry, creating a driving force for economic growth.
Categories:
Financial News Economy News Doing Business In Vietnam