Money begins to return to stock, a series of stocks rebound

Wednesday 08, 01 2020
The 3 stocks of CTG, VPB, and BID gained well today, which is one of the big factors that helped the market increase and improve investor's anxiety. 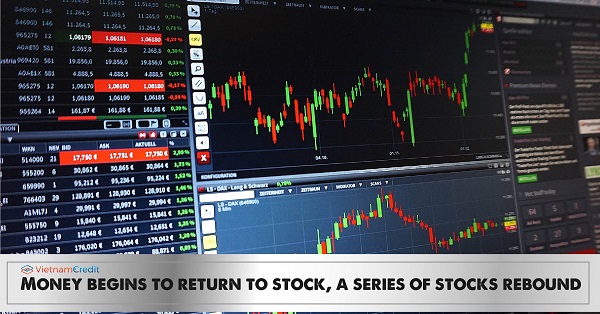 Ending the morning session, VnIndex "broke the trend" again. The index gained more than 1 point when it closed in the morning.

The most notable is ROS. Towards the end of the morning session, ROS ran from the floor to the ceiling and closed the morning session at a 15-ceiling price. What worths mentioning is that in the last period, ROS has decreased by 50% from a stable price of ~ 26,000 VND. This morning, when ROS reached the threshold of 13.x, both domestic and foreign cash flow was quite strong. Foreigners bought over 511 thousand ROS shares. Other stocks "they" FLC also increased sharply.

The 3 stocks of CTG, VPB, and BID gained well today, which is one of the big factors that helped the market increase and improve investor's anxiety.

GAS, PVD closed the morning session with the highest price but still not regained the green color.

VNM closed the morning session up by nearly 1%. Foreign investors bought over 200,000 shares of VNM in the morning.

Yesterday ended in astonishment of investors: The VN-Index closed down 9.35 points (0.97%) to 955.79 points; HNX-Index decreased by 1.13% to 101.23 points and UPCom-Index decreased by 1.36% to 55.88 points. The psychology of trading on the stock market became heavier when the days approaching the Lunar New Year stock market created more shocks on investors' accounts. However, early this morning, the stock market "turned back" like never before. At the beginning of trading session 7/1, a series of stocks rose, helping all indices on both exchanges increased. Among blue chips, the most notable is CTG. The stock market plunged yesterday, not only did not drag CTG down to the new price level but on the contrary, cash flow from foreign investors helped CTG increase its price. Foreigners were net buyers of CTG yesterday. This morning, CTG continued to increase strongly by 1.2%.

However, only after the first 40 minutes of excitement, the stock market collapsed again when Petro codes, which were the most well-supported stocks, were quite sideways. Oil and gas group after yesterday's boom session, together with the world oil price movements, are now moving sideways. GAS, PVD, OIL, BSR ... all fell slightly or stood still. It seems that the energy stock story, world oil prices ... still need more time to see the trend. The news is only of short-term nature and whether the impact of the news on the industry is long-term or not is something investors should consider carefully before placing orders.

By 9.50 am, VnIndex has dropped more than 2 points. HNX-Index stood still. Market liquidity improved significantly but remained at a relatively low level, reaching 1,230 billion on the HoSE and 52 billion on the HNX.