Monday 17, 02 2020
The nCoV epidemic has a greater impact on foreign demand for domestic goods and services, in particular agricultural exports and tourism. Vietnam has been implementing its monetary loosening policy continuously in recent years; therefore it should be careful with the current monetary loosening trend in several countries in the context of the Covide-19 epidemic (previously known as the nCoV epidemic)

The effects caused by the nCoV

The epidemic caused by the latest nCoV virus is developing negatively in China and spreading to other nations, including Vietnam, reducing the consumer demand as well as delaying the manufacturing in several fields (due to manufacturing depending on materials from China, worrying mentality, or highly-increased prevention cost).

This means that it simultaneously affects both demand and supply in negative ways. This demand shock will cause challenges for the State Bank of Vietnam because they have to choose between development promotion or inflation control.

Especially, it will be even more difficult for the State Bank of Vietnam in the context of inflation in Vietnam having a tendency to increase sharply in recent months (CPI in January 2020 increased by 6.43% compared to the same time last year) and there having almost no fiscal balance.

Some Asian countries whose economies depend heavily on China have implemented loosening policy (Thailand) or are willing to loosen their monetary to lessen the impacts of the epidemic. In Vietnam, because of the distinctive features of the monetary system, most operation interest rates declines are administrative, symbolic, and hardly affect the market.

The increase or decline of the credit growth level (money supply) is what really determines whether the monetary policy is tightened or loosened. Vietnam should be careful with the current monetary loosening trend for the following reasons:

One of the important bases to consider whether to implement a monetary loosening policy is determining if the shock is temporary or long-term. The nCoV shock is likely to be temporary. If this is true, the shock will not affect the potential revenue, and hardly affect the total demand of the Vietnamese economy. Everything will revert back to normal as soon as the epidemic is gone. Therefore, the implementation of the monetary loosening policy is unnecessary.

The nCoV epidemic has a greater impact on foreign demand for domestic goods and services, in particular agricultural exports and tourism. The demands in these types of goods and services depend mostly on foreigners’ income. As a result, the monetary loosening policy will not be able to stimulate their spendings. 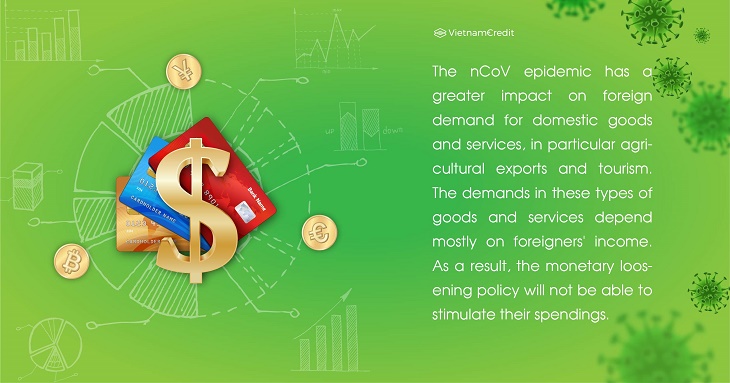 If that comes true, even if the economy has to face disadvantageous shocks, companies will not, or will hardly increase their prices as they do not expect the inflation to rise. Vice versa, if the monetary policy gets inconsistent, companies will likely increase their prices, despite the monetary expansion being temporary, thus severely increasing the drawbacks of inflation reduction.

What Vietnam should do

Vietnam has been implementing monetary loosening policy in recent years. The currency/GDP and credibility/GDP demands have increased from 120% and 110% in 2013 to 170% and 150% at the moment, respectively. These are rather high numbers compared to those of other countries. In the current context of the inflation increasing rates being high, it is ill-advised to put the growth promotion pressure on the monetary policy.

The SBV should give priority to continuing structural reforms towards a healthier monetary system in the future. Interest rate support, if any, should be limited to only businesses directly affected by the disease.

The lesson of excessive monetary easing in 2009-2010 to cope with the global economic downturn is still valid as Vietnam had experienced double-digit inflation in the following years while not being able to avoid economic stagnation for many years. The cost of stimulating aggregate demand then is much greater than the temporary benefits it brings.

The internal issues of the economy are more worrying and long-term than the nCoV epidemic. The goals of economic growth can be supported by persistently removing institutional barriers, improving the business environment and speeding up the disbursement of approved public investment projects.

Fiscal capability to develop (to increase public spending or reduce taxes) is essential for temporary shocks like nCoV. Unfortunately, Vietnam does not have much of this.

The Covid-19 epidemic is having a major impact on the economy. Many businesses...