How organizational conflicts can affect businesses?

Tuesday 29, 09 2020
Conflict often has negative implications, but its effects on the organization can be positive and negative. So, team or organization conflicts should be minimized and controlled, not eliminated entirely. 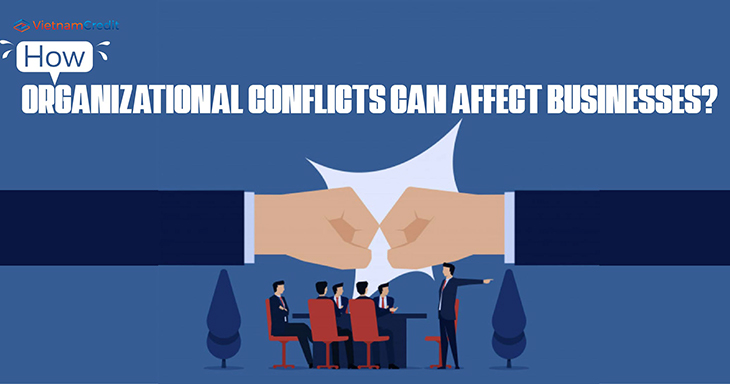 The world around us has many paradoxes. They appear in personal, family, social life, and even in large organizations. The more members in a group are, the less cohesion there is. A group has a strong relationship and flexible cooperation when the maximum number of people in the group is 5. However, there are cases of groups of 5 but conflicts occur frequently, especially in multinational companies where employees are gathered around the world. They have conflicts because of needs, goals, behavior, ideas, and so on. This makes productivity decline, team members lose motivation to work. Therefore, leaders must take responsible action to minimize unnecessary conflicts if they do not want the work environment to become harmful.
Conflict is an opposition, which affects the interests of individuals or collectives. Therefore, workplace conflict is inevitable, especially when employees have different countries and working styles. Therefore, conflict management in organizations or groups is important that managers need to notice and improve. Applying the theory of leadership and management, there are 2 objects that can create a conflict in organizations which are human beings and organization culture.
In terms of individuals,  the employees have a conflict with each other. Applying sources of conflict theory, there are three main reasons which are cause organizational conflicts.

Since the employees work in an international environment, they have many opportunities to interact and discuss with people from different countries, languages, ​​and cultures. Cultural and linguistic differences are one of the main sources of conflict at multinationals. Language and culture are closely linked, inseparable. In fact, the Vietnamese language has divided many ways of addressing depending on age. This represents the ancient culture of respect for elders. Or in the working environment, Vietnamese people are often willing to work overtime or even on weekends. It is in contrast to the working culture of European countries. Moreover, Vietnamese employees build personal trust not only with their personal ability but also through external events. Therefore, managers should establish a budget for group members or organizations participating in food or sports activities is essential. This is also a favorable environment to reconcile existing conflicts and minimize future threats. As a result, members become more engaged and productivity improves. Furthermore, cultural differences lead to culture shock. Culture shock is the primary reason why expatriate assignments fail. Almost medium and large size enterprises have employees overseas. This is especially true at the present time in Vietnam when foreign investment flows are continuously flowing into Vietnam. Total FDI value has nearly doubled over the past eight years from $ 8 billion in 2012 to $ 15.5 billion in 2019. This shows that the labor market in Vietnam has more and more foreign workers, which is directly proportional to the inflow of foreign investment. In Vietnam, multinational companies will create a foreign community where they can exchange and exchange knowledge with people who have had long experience living in Vietnam. In addition, training programs will be created to help everyone, including spouses and children, adapt to a new living culture. Therefore, the expatriate should be instructed and trained before coming to Vietnam to work to avoid culture shock.

Cultural and linguistic differences can inhibit communication between employees. it can lead to misunderstandings and unnecessary conflicts at work. In 2019, Vietnam has dropped 11 places in the ranking of English proficiency in the world from 41 to 52 emphasizes that employee productivity is directly affected by misunderstanding in communication. It can be as simple as an employee misinterpreting the team goals, or assigned tasks, especially the confusion can have a negative impact on the team's results such as delay, cancellation of results, and compensation. Therefore, managers need to be skilled at communicating not only with words or verbal but also with body language. Moreover, employees should know more about the big goal with which their duties are related. This will show them the distance that they've reached and the distance to their goal. However, the conflict will continue to arise as groups or organizations strive to achieve their goals. The reason is that each person has different opinions. In this case, the administrator can apply the constructive conflict method. This method helps members to have a different perspective, which makes them understand and recognize the problem.

Role conflicts are evident when an individual receives many inconsistent tasks from management but does not have enough time or resources to execute. The resulting effect is an increase in the anxiety and frustration of a kernel. For example, a warehouse accountant is assigned the task of exporting-importing goods to the company, but at the same time required by the manager to go into production. In this case, the worker will be subject to two different sources of pressure from the production team and the accounting team. As a result, role conflicts occur when roles of different positions are performed by one person. This conflict often occurs in SMEs in Vietnam. Due to financial and personnel limitations, holding a high position in the organization can handle many unrelated tasks accounting, reading & developing marketing, and customer services. Avoiding role conflicts is impossible because it is ubiquitous, even in everyday life. The only thing a manager can do is minimize the consequences caused by role conflict. For instance, increasing interaction with junior staff can help reduce stress. Moreover, it helps everyone around to know that each individual has many roles and needs to be responsible for the job. In terms of organizational culture, the employees are easily conflicted with assigned duties and unreasonable standards, policies.

+      First, goal conflicts can be created by the different assigned duties of each department. For example, the finance department is only concerned with revenue, cost, and profit, while the marketing department is concerned with sales. The overlap in the different departments' expectations created internal contradictions. This is even more evident in small and medium enterprises in Vietnam, where there is a simple management model. This conflict is quite common in SMEs because of limited human and financial resources. Moreover, he also emphasized that the more the possibility of conflict, the greater the dependency level in the task among individuals or collectives. It shows that task interdependence is one of the biggest reasons which lead to conflicts in an organization. The reason is that conflict avoidance becomes more difficult when employees are interdependent. It leads to an increase in the intensity of the relationships. Therefore, opposition views are easily turned into conflict To mitigate this negative impact, the manager can create a discussion session for departments to share their difficulties and goals. From there, the parties will understand and respect the opinion as they work to accomplish the overall goal of the organization.

+      Second, when policy negotiations (such as salaries, bonuses, working hours) fail to satisfy the manager and the employee, conflicts between the employee and the organization arise. According to Upasana (n, d), employees will feel dissatisfied when the working environment is unsecured, low wages, changes in duties or responsibilities. It leads to tension, pressure, disappointment between employees and the workplace, and even quitting. These kinds of conflicts often stem from employee emotions. Moreover, Vietnamese staff is afraid to propose as well as inform about conflicts of interest until they can no longer bear it. This shows that Vietnamese workers are not trained and guided when conflicts arise. Therefore, the manager should provide ongoing employee training in conflict resolution by making a self-assessment. This helps them to be aware of their own strengths and weaknesses and their responsibilities. From there, they can assess themselves on the salary and bonus they receive.

On the other hand, group conflict doesn't always have negative results. Applying organizational conflict outcomes, there are two positive effects.

+      First, the emergence of paradox often enables team members to understand more deeply by multi-dimensional perspectives. It gives the opportunity for new solutions that could be better to be created. If people suppress their opinions, the results may not be the most effective solution. Therefore, the manager should urge all members to comment. However, the point to keep conflict from escalating is to focus on the task, not on the individual presentation. Moreover, the conflict manager can maintain the polarity of conflict by creating a culture of correct behavior. Instead of judging another member's opinion, everyone can contribute in a good way.
+      Second, conflict may lead to organizational restructuring to avoid existing conflicts. This argument is considered to be simple but relatively effective. a manager only needs to gather like-minded people and separate those with conflicts. As a result, the manager still gets many different ideas without conflict. However, if each person's skills are necessary for the group so they cannot be separated, the manager can create a reasonable distance. Reasonable sitting positions can minimize group conflict. Moreover, the opposing force could be an effective way to reduce tensions between groups. Managers can direct groups to focus attention on common goals like competitors instead of internal competitors. This solution is especially effective for ad groups and sales groups. For example, two sales groups for the same company want to maximize market share and increase sales. However, the focus on a rival company can lead the two groups to link together to improve the organization's sales. The rivalry here is not necessarily tangible. It can be a concept or a problem that the organization is facing.

Over the past three decades, coffee has played an important role in Vietnam’s...

The rising logistics costs are having a significant impact on the value...