Thursday 07, 05 2020
While retail sales declined, e-commerce and online shopping, which are of great support for the trading activities of many stores during the outbreak, have seen sharp increase. 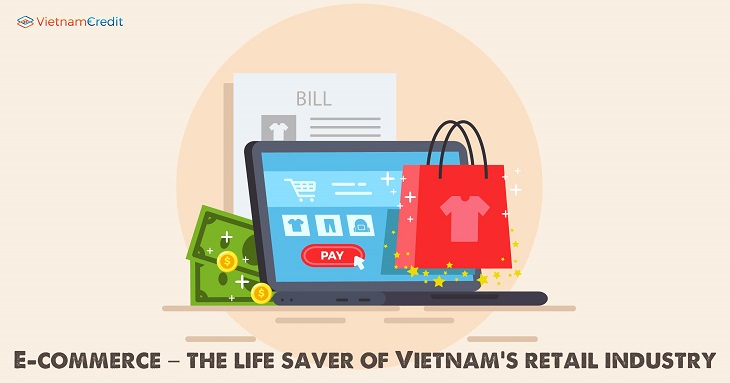 Online shopping is on the rise

According to the General Statistics Office, the retail sales of accommodation, catering and travel services decreased by 9.6% and 27.8% respectively in 1Q2020 compared to the same period last year. The number of tourists going to shopping malls in Ho Chi Minh City and Hanoi, according to CBRE, decreased by approximately 80% during the epidemic period.

While retail sales have declined, e-commerce and online shopping have grown, supporting the activities of many stores during the outbreak. In Vietnam market, among e-commerce giants, Tiki has grown at the fastest rate and recorded 4,000 orders / minute. Online sales of SpeedL and Saigon Co.op have grown exponentially. In addition, car-hailing apps have enabled "grocery shopping" services to serve customers' shopping needs.

In the Asia Pacific market, multi-channel and online retail perform well during the epidemic outbreak. Online retail platforms can serve many kinds of products from consumer products, cosmetics to luxury goods like cars, or services such as museums sightseeing, real estate tours. In the long run, the growth of e-commerce will be a solid foundation for any future development in the retail market. COVID-19 has had a negative impact on the market of townhouses and shopping centers. Premise lease breaking rate at shopping centers is not high due to the facts that tenants have been offered support by reducing or exempting rents during social distancing. However, opposite is true for small townhouses whose rent is expensive and tenants are unable survive through the epidemic.

Since the Government requested people to maintain social distance, most industries have been closed except for essential ones. The decline in sales has made tenants unable to cope with the rent pressure, resulting in early termination of tenancy agreement. Premises return is a must to maintain the "survival" for businesses in general. For chain-based brands, the closure of some stores, combined with restructuring policies or salary cuts is also a short-term solution to stabilize the financial strength which is facing many difficulties.

Covid-19 has influenced retail market rents. Although the social distance has been relaxed at the end of April, most industries are still not allowed to go into operation as usual. April’s revenue is expected to decrease by 90-100% compared to the same period last year and by 60-70% compared to March.

The current situation forces developers to maintain incentive policies to reduce cost burden as well as create recovery time for tenants to overcome difficult periods. In February, developers were still wary and did not really want to support tenants.

In March, when the Government made the decision to close dining and entertainment venues, developers began offering supportive policies ranging from 10-30% of rental costs depending on industries with different levels of influence.

In April, many developers were willing to offer up to 50-100% of the rent. For townhouses, the reduction depends on the landlord and the rate falls in 20-30% if there is a decrease. In addition, developers have to become more flexible in terms of deposits, payments and actively support tenants in many forms.

Ms. Vo Thi Phuong Mai, Deputy Director - Head of Retail Space Services of CBRE Vietnam, said: "Covid-19 has negatively affected traditional shopping channel but at the same time created many opportunities for small and medium sales models such as convenience stores, pharmacies and especially e-commerce to grow positively". According to Mai Phuong, e-commerce has changed the development trend of the retail market and supported the continuous business in traditional stores during the outbreak.