More Restrictions On Credit Card Activity: Is It Feasible?

Wednesday 11, 12 2019
The State Bank of Vietnam (SBV) is seeking comments on the draft circular to amend some articles in Circular 19/2016 on banking card activities. Accordingly, the draft will have more restrictions on the operation of ATM and credit cards issued by both banks and financial companies. The problem is: can these regulations be implemented in practice? 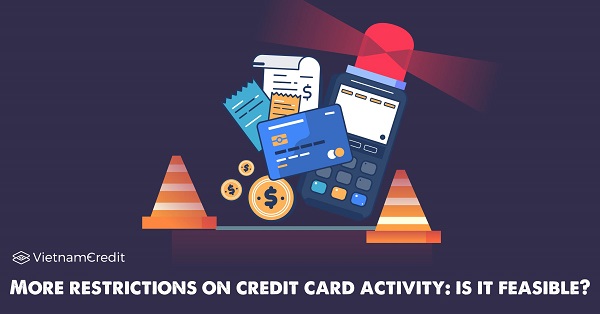 Prohibited, but how to know which ones to ban?

A remarkable content of the draft circular is to prohibit the use of cards to make payments abroad for business transactions, foreign currency trading, securities on foreign e-commerce platforms, as well as the use of cards to conduct transactions for money laundering, terrorist financing, fraud, fraud, and other law violations.

Obviously, the above activities should / should be banned, since they are all activities that harm security, economic and social safety. However, it is worth mentioning who, and how to identify the transactions in the aforementioned categories and how to handle them? If the draft does not provide specific measures for effective identification and prevention to the implementing agency, then it can be said immediately that such provisions in the draft are just for having and fulfilling responsibilities.

Regarding the scope of using credit cards, the draft regulations are only used to pay for goods and services; to deposit and withdraw cash according to agreements between cardholders and card issuers. Are there any other types of transactions involving credit cards besides paying for goods and services to be banned as stated in the draft? Assuming the cardholder uses a credit card to conduct a non-payment transaction, in the form of transferring money to someone but under the guise of paying for the person's service, will the transaction be banned, and if it is banned, then how can it be detected and how to prove it is a short or banned transaction?

How can we understand correctly?

As mentioned above, the draft allows cash deposit and withdrawal according to the agreement between the cardholder and the card issuer. In other words, if there is an agreement between the card issuer (the bank) and the cardholder (on withdrawals or transfers), this is legal, as recognized by the draft. On the other hand, the draft has specific provisions to prevent cash withdrawals via cards or banks that transfer money from credit cards to personal accounts. Thus, the same cash withdrawal, the draft sometimes allowed, sometimes banned. How can we understand correctly? In addition, the draft stipulates that card service organizations implement control and prevention measures (refusing transactions, refusing card payments, terminating payment contracts), preventing taking advantage of credit card for improper purposes, controlling the phenomenon of commercial banks transferring money from credit card to personal accounts, not in compliance with current regulations. This type of embarrassing regulation is a sign of ineffectiveness because the SBV allowed commercial banks to control and prevent the transfer of money by ... those commercial banks themselves!

The hazard must be demonstrated

The SBV has been "very concerned" with withdrawing cash via cards and transferring money from credit card accounts to personal accounts. This concern is formally addressed by specific provisions in the draft. The press continued to respond by stating cases of "real people" regarding these short withdrawals and money transfers, and was also "concerned", but did not show its consequences.

On top of that, there has not been any convincing explanation that shows that cash withdrawals via cards and transfers from credit card accounts to individual accounts pose a significant specific hazard for economic and social order from lawmakers, experts as well as industry insiders. As mentioned in an article on Saigon Economic Times, if any, there are just a few interpretations, rather vague and unconvincing views to the need to strictly prohibit these acts.

Therefore, before the law to make the above-mentioned acts of withdrawing money and transferring money as drafted, the State Bank needs to have an official, complete and accurate explanation of why the above acts need to be banned. Unfortunately, up to now, the SBV seems to have not had such an official explanation before the public and the relevant authorities.

Otherwise, this prohibition and legalization only reflect the one-sided will of the legislators without the necessary understanding, practical reference from countries around the world, and more importantly, they will be disabled in practice by going against the reasonable needs of many people in society.
​
Keep Reading -> Cashless payment: Drastic need for state management