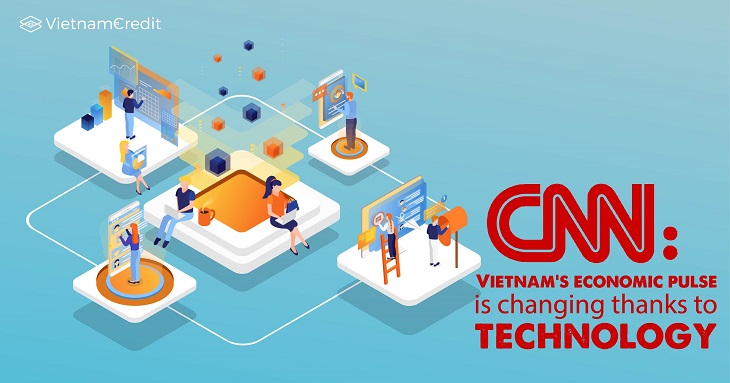 After their interviews with the leaders of several businesses in Vietnam, such as Appota, Royal Spirit, Group, and Tiki, CNN has come up with a commenting journal.

Moreover, CNN has also cited a report from Google and Singapore Temasek describing the Vietnamese digital economy with a growth of more than 40% per year and is considered a “rising dragon”.

Considered one of the most dynamic start-ups in Vietnam, Appota has intelligently grasped the growth of the domestic smartphone market. According to Nguyen Thuy Lien – Investment Director of Appota – this company was founded in 2011, and it is having a “digital ecosystem” with more than 40 million users.

This business has launched licensed games from publishers in China, constructing a payment application for gamers, as well as providing Wi-Fi sharing application for reading books, news, comic books, watching movies, and other entertainment means.

Moreover, Appota is also running a company specializing in providing enterprises with advertisement services. CNN cited a report in 2019 of Google and The Mobile Marketing Association identifying Vietnam as a "market associated with mobile phones" with more than 51 million smartphones, with the number of users aged 15 and over accounting for more than 80%.

In addition, Vietnam also has a wide coverage network, and even rural and mountainous people can access 3G or 4G. Currently, Ms. Nguyen Thuy Lien is responsible for ensuring the attraction of capital for Appota, and so far, has raised 17 million USD.

She says attracting investment is now easier than before. In particular, most of the investment funds are from abroad, especially from Korea and Japan. According to her, Vietnamese investors seem to be still very cautious in the field of technology, and they are more conservative and prefer to invest in real estate. In the coming years, Appota will have a new breakthrough by engaging in the development of physical products, operating via smartphones.

Recently, Appota has launched a smart key operated by software developed by Appota. Ms. Nguyen Thuy Lien also shared: "Appota's vision is to integrate the maximum smartphone platform into operating at home and office". This is the next step of "digital transformation". As a country with manufacturing strengths, Vietnam is the world's third-largest exporter of textiles and garments (after China and Bangladesh). However, the global textile industry is highly polluting, generating more than 90 billion cubic meters of water every year and accounting for about 10% of global carbon emissions.

Known as DBW, the 20 million USD factory is designed to ensure both environmental and the livelihood factors for more than 1,000 employees. "Even the seats are made to fit the average body size of the Vietnamese," Barkell-Schmitz said. In the entire plant, LED lights emit optimally to reduce eye strain and headaches, and the company also makes calculations to put ventilation and air conditioning at the right temperature.

They chose the German sewing machine - the type that automatically switches off when not operating. DBW bulldozers and sewing machines use much less electricity than conventional machines.

The factory is equipped with a "high-tech dyeing machine, using less dye and water". The dyeing machine acts as a giant funnel, directing rainwater into the tank - which is then filtered and used to wash the fabric.

The plant also incorporates a modern water system - in which hand and dishwashing water are filtered and reused to irrigate vegetable gardens, providing food for the plant's canteen.

E-commerce has a strong boom

In the e-commerce market, Tiki is being evaluated as one of the leading e-commerce platforms in Vietnam. According to Tiki CEO - Mr. Tran Ngoc Thai Son: "Tiki has a large number of consumer orders, with an average of 17 million visits and about 4.5 million items shipped each month."

The expansion of Tiki is a testament to the booming rate of Vietnam's e-commerce market, estimated to be worth 6.2 billion USD in 2019. This growth process is fueled by the ever-growing young population of the Vietnamese population. Vietnamese people embrace new technology very quickly and feel optimistic about the future, which motivates them to go online and shop online.

Tiki's leading products are consumer electronics. "Effective logistics" is the key to the company's success. Tiki has 33 warehouses in 13 cities and boasts its fast 2-hour delivery.

Yet, while Vietnam is urbanizing, nearly two-thirds of the population still lives in the countryside, resulting in deliveries to remote areas that often take longer and cost more. Mr. Son also shared that: “More than half of shoppers still pay cash on delivery”.

Therefore, what e-commerce units desire is the trend of electronic payment, in which the seller is paid earlier and all stages are shortened, being more widely applied.

Besides opportunities and benefits, small and medium enterprises also face...

Concerns about the decline in purchasing power and consumption of the society...