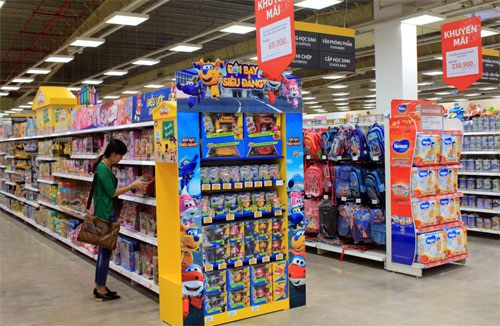 According to A.T. Kearney, Vietnam is moving ahead and is emerging as an important market for retail expansion with its liberalized investment laws.

“Vietnam’s moment seems to have finally arrived. The economy is growing (estimated 6.6 per cent growth in 2017) and is shifting towards more privately-owned businesses and higher value export,” A.T. Kearney said in its newest edition of the Global Retail Development Index.

With favourable government policies, urbanisation, a growing middle class, and a relatively young population, foreign retailers have reasons to be positive about the country, it added.

“The Government has allowed 100 per cent ownership by foreign retailers since 2015, and favourable policy continues to usher them in, as evidenced by the 12.5 per cent growth in foreign investment in 2016. A recently concluded free trade agreement with the European Union is expected to further boost investments in Vietnam.”

According to A.T. Kearney, convenience stores and mini-marts are the fastest-growing segment. Circle K and FamilyMart entered the market in 2009 and are expanding aggressively. FamilyMart plans to have more than 800 franchised stores by 2020. 7-Eleven plans to open its first Vietnamese store next week as planned in a franchise agreement with Seven System Vietnam; a total of 1,000 stores are planned in the coming decade.

A.T. Kearney said that e-commerce is growing for Viet Nam, with sales expected to grow 22 per cent to account for 1.2 per cent of the total retail by the end of 2017.

Steep online discounts and promotions are driving sales, but they are also forcing firms to shut down. In the past two years, Beyeu, Deca, and Lingohave all closed after protracted struggles. Still, new entrants and investors are making bets on the fast-growing market. Vietnam-based VNG Corporation reportedly invested about $17 million for a 38 per cent stake in e-commerce platform Tiki.

The index analyses 25 macroeconomic and retail-specific variables. The study is unique in that it not only identifies the markets that are most attractive today, but also those that offer potential.