7 valuable lessons from the richest man of all time

Tuesday 14, 01 2020
The phrase "Too big to fail" (too big to fail) that business people often use is not a modern invention. 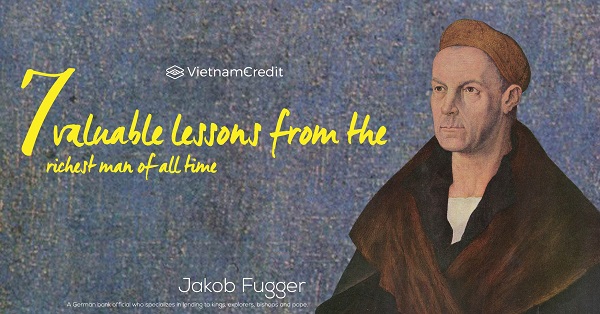 Jakob Fugger is a German bank official who specializes in lending to kings, explorers, bishops and pope.

When he died in 1525, Fugger had a fortune of about $ 400 billion at present value, equivalent to 2% of Europe's GDP at the time, meaning he was the richest billionaire in history.

American billionaire John D. Rockefeller also achieved nearly the same assets, but the proportion of US GDP is smaller.

During his lifetime, Fugger was the grandson of a farmer, but he persuaded Pope Leo X to legalize the loan for interest. He contributed to the creation of the Holy Roman Emperor in the election of 1519. He and his money helped Charles V of Spain become an empire as big as Napoleon's.

1. Invest when others are scared

Fugger has made two big bets, helping to create his huge fortune. The first was when he decided to support the Austrian king Sigismund as the Republic of Venice was about to take over the territory, but the familiar banks refused to lend him the money. Fugger mobilized all his possessions and even the entire family and friends' money for Sigismund. Finally, Austria and Venice settled the war in peace. In return, the Austrian king allowed Fugger to exploit the largest Schwaz silver mine on earth.

Fugger also invested in Hungarian copper mines when others feared Turkey's invasion. Like silver mines, he made a lot of money from copper mines. It is true that the Turks came, but long after Fugger died.

The phrase "Too big to fail" (too big to fail) that business people often use is not a modern invention. Fugger was the one who understood the concept very well and applied it when lending money to monarchs. He knew that one thing these powerful "debtors" could not live without was the ability to "borrow" a huge sum of money. No borrower likes Fugger and his terms, but they can't live without him.

>>> 7 tips of self-made millionaires: Being prepared is never redundant!

Fugger understands the value of information. He invented the world's first news service and used it to find events that could cause market volatility before others.

Emperor Maximilian (Charles V's grandfather) once told Fugger that King Henry VII of England had sent him some gold by sea to mortgage his loan to fight the French. However, Fugger refused to lend because his spies in the UK said no ship had left the port. Italians invented double-entry bookkeeping. Fugger was one of the first to use this method. He improved it into an aggregate balance sheet for many of his businesses. He was also the first person to send an auditor to inspect the operations of branches.

Fugger spent several years as an apprentice in Venice, the capital of the business at the time. He not only gained knowledge, experience, but also relationships that served him later.

An Austrian bishop is one of the most depositors in Fugger's bank. When the bishop died in 1509, the Pope asked Fugger to return the money to the Church immediately. Fugger was at a time of financial trouble at investing in mining projects, and this withdrawal, or even just rumors about it, could ruin him. However, instead of fear, he still spent heavily as if he had a lot of money. His calmness kept the market from going up and down, and he had enough time to discuss with the Pope.

​Fugger is most famous for founding Fuggerei - the world's first low-income housing project. He said that any employee deserves a home, so the rent is only a quarter of the market price. Today, Fuggerei is still active and is the largest tourist attraction in Augsburg, his hometown in Germany.

>>> 5 Principles To Maintain The Performance Of Elon Musk

The art of making a good M&A deal requires a combination of careful research,...