Why Is Vietnam The Exception In The Race Between Korea And Japan In The ASEAN Market? 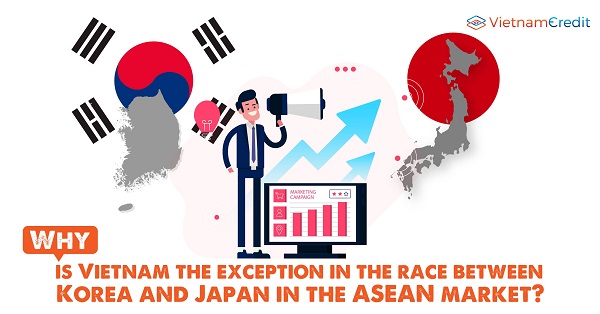 South Korea sees Japan as a rival in the ASEAN region, but cannot yet compare with Japan in terms of regional economic cooperation.

Korea's trade with ASEAN is only about 70% of that of Japan, while foreign direct investment is only 30% and official development aid is 10%. 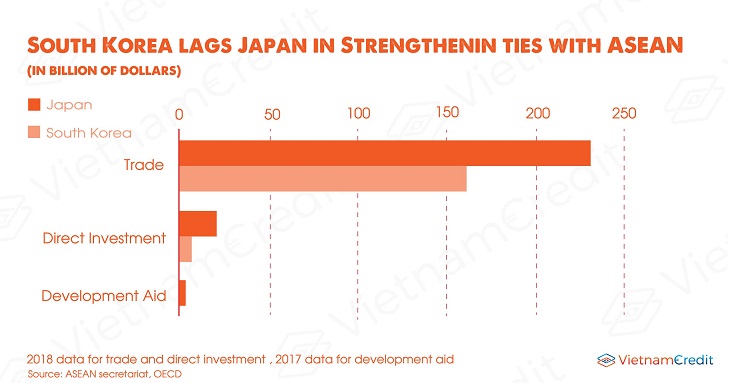 An exception to this is Vietnam. Since Samsung Electronics started producing smartphones in Vietnam in 2008, Vietnam has accounted for about half of Korea's total trade and investment with ASEAN, far ahead of Japan.

Samsung Vice President Lee Jae-yong said that Samsung will need a lot of high-tech engineers soon. Semiconductor field, high-tech screens, smartphones ... are all being produced according to market demand, with high added value. Regarding the R&D center - expected to be operational in Hanoi in 2022, Samsung announced that it would employ 3,000 Vietnamese engineers to work.

However, the Tokyo government does not seem surprised by this, with an official comment, "Samsung is great, but we must be clear here. We don't care about the diplomatic deals [of Korea] with ASEAN.”

Other ASEAN members still welcome more investment and support from Korea. But Nikkei judged that these countries still consider Korea, with a population of 50 million and slowing growth, to be a potential export market. And unlike the United States, China and Japan don't trust Seoul in security matters.

​But there is still a way to strengthen the relationship between ASEAN and Korea.

Linking is the key for ASEAN diplomacy, making the bloc a good partner, creating a favorable environment for multilateral cooperation. By joining the Association, relatively small countries can have a greater say in regional issues. A prime example is the annual East Asia Summit that ASEAN, Japan, the United States, China, South Korea, India, and Russia regularly attend.

So how can ASEAN strengthen diplomatic influence with Korea and vice versa? One of them may play a more prominent role in North Korea's denuclearization talks. Singapore and Vietnam have hosted two US-Korean historical summits since 2018.

Regarding North Korea, Kavi Chongkittavorn, a senior fellow at Thailand's Chulalongkorn University, said: "ASEAN members will be the most suitable person to be a "sherpa" (a civil servant or diplomat undertaking preparatory work before a summit) for Pyongyang as it climbs to the “peak” of economic reform."

In addition, in September, President Moon Jae-in became the first South Korean president to visit all 10 ASEAN members. At this year's summit with ASEAN in Busan, South Korea, the two sides reached a number of agreements, such as Hyundai Motor's announcement of the construction of an automobile factory in Indonesia - the first in the region.

If so, a win-win situation will arise: Korea will strengthen its influence in ASEAN markets, while ASEAN will gain credibility from helping to settle a deadlock on the Korean Peninsula.