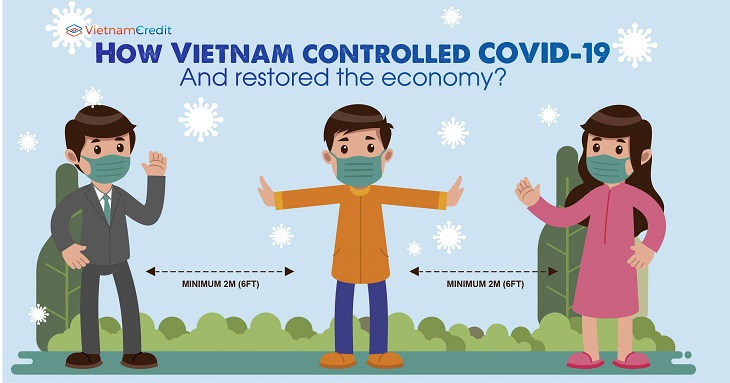 While businesses have reopened, the Government of Vietnam remains alert and ready to respond to the challenges posed by the pandemic. On the other side, the government has also offered incentives and financial support to boost economic growth.

When schools and businesses reopened after Unification Day and International Labor Day, traffic congestion in major cities like Hanoi and Ho Chi Minh City also came back on Monday morning. beginning of the working week. The landscape is in stark contrast to a number of countries across the globe that are being spaced out in an effort to control the spread of COVID-19.

Vietnam removed its social isolation measures at the end of April 22 but continued to take precautions by restricting crowds and enforcing masks. Vietnam has recorded 271 cases of COVID-19 infection as of May 5, of which no deaths have been reported. Vietnam has managed to achieve this feat by tracing people who have been exposed, tested, quarantined in a timely, effective manner by state agencies. Vietnam recorded the first two cases of COVID 19 on January 28 on flights from China, after which they suspended all flights from mainland China on February 1, after that are all international flights on March 25. Vietnam also stopped issuing visas and welcomed international tourists to prevent a pandemic. All this seems to have paid off, as Vietnam learned and learned from its experience in dealing with the SARS virus in 2003.

With other countries including Singapore and Malaysia having recorded thousands of new cases and continuing various closure measures, Vietnam has done a great job of overcoming difficulties compared to other countries.

Like other countries affected by COVID-19, Vietnam's economy was also significantly affected during the outbreak. GDP fell to 3.8% in the first quarter of 2020, compared to 6.8% in the same period of 2019, according to the General Statistics Office of Vietnam (GSO). In the first three months of the year, nearly 35,000 businesses went bankrupt - for the first time in decades, the number of companies closed higher than newly registered businesses. The International Monetary Fund (IMF) has also forecast that the economy will only expand by 2.7% this year.

However, the Asian Development Bank (ADB) has forecast that Vietnam is one of the fastest-growing economies in Southeast Asia despite the impact of COVID-19. In the 2020 Asian Development Outlook report, Vietnam's economy is forecast to return to 6.8% by 2021, as long as the disease is under control. To help revive the economy, the Government has launched a credit support package worth $10.8 billion, reduced interest rates, postponing the payment of taxes, and land use fees for some business lines. The government also continues to provide financial assistance to employers and workers affected by the pandemic.

The World Bank believes that Vietnam's economy is still positive and in the report titled East Asia and Pacific at the time COVID-19 reiterated that Vietnam benefit from many free trade agreements (FTAs) with favorable labor market conditions.

In this context, industries that are important to the Vietnamese economy are expected to help the economy recover strongly.

Vietnam's tourism industry has been significantly affected by the pandemic. Saigontourist - a travel company reported an 80% decrease in the number of customers in February and a 90% reduction in March resulting in a monthly decrease of $21.1 million. With practically no international visitors since March 25, tourism and related businesses have suffered significant losses.

However, while the situation is unprecedentedly difficult, the tourism industry is expected to recover faster and stronger. For example, during Vietnam's weekend holiday from April 30 to May 3, domestic tourism to areas like Da Lat, Vung Tau, and Mui Ne increased with the traffic congestion pattern. roads leading out of Hanoi and Ho Chi Minh City. Hotel occupancy rates have also increased, and some transportation operators have also been fined for failing to maintain social spacing instructions inside the coach. Savills Vietnam has noted that the tourism industry will fully recover within six months after the epidemic is stopped.

In addition, Vietnam is heavily dependent on the number of Chinese and South Korean tourists, accounting for 56% of international visitors in 2019. This also presents an opportunity, as China and South Korea are almost out of control. control disease. When international flights resume, it is likely that international flights from these countries will begin, helping tourism to recover. If Vietnam succeeds in its fight against COVID-19 and is considered a safe country for tourism, the number of tourists may increase. The industry's recovery seems to be on the right track with restaurants and cafes opening and serving customers over the weekend.

The pandemic is driving digital transformation in Vietnam. Banks have cut online transaction fees to encourage cashless payments, while demand for food delivery and food delivery services has skyrocketed. Retailers in Vietnam reported that phone orders and applications increased 10-fold compared to weekdays. This allows retailers to hire additional salespeople to meet demand. Online shopping also ensures that while consumption is falling, there will always be a demand for products, allowing businesses to operate. In addition, with schools closed since the Chinese New Year holiday, schools and universities are forced to use online tools and classes. This increases the demand for hardware such as laptops, tablets, and software services such as Zoom. Experts predict that online delivery courses will remain popular even after the pandemic as an attitude towards online learning. Vietnam's e-commerce industry is still developing but opportunities created by the pandemic have accelerated this change.

The pandemic forced 15% of manufacturing companies to cut production, with the textile and clothing industries hardest hit, directly affecting 2.8 million workers. Production operators complain about the lack of raw materials for production. Automakers such as Toyota, Honda, Hyundai, Ford, and Nissan also temporarily stopped production due to a lack of parts and demand. Samsung has even cut production of parts and components because of pandemic border restrictions.

However, this will also allow companies to reconsider their production and supply chains. Companies will have to diversify their input sources and consider new businesses. For example, some garment factories have reorganized their businesses to produce masks. To support this, the government has also removed restrictions on product exports. Vietnam has also moved personal protective equipment and testing equipment to several countries affected by the pandemic.

However, when China had a pandemic under control, supply chains were able to resume, allowing for the many raw materials needed for production. This will give businesses a stepping stone as they seek to rearrange the supply chain. Manufacturing enterprises in Vietnam have considered the supply of input materials from Korea, Japan, and India. In addition, countries like Japan have announced a $220 million subsidy program to encourage manufacturers to diversify their production facilities to Southeast Asian countries, which will help continue industrial recovery in Vietnam.

Vietnamese airlines have reported initial losses of a pandemic estimated at $1.3 billion. About 10,000 employees of Vietnam Airlines have had unpaid leave or the equivalent of about 50% of employees. While social spacing measures are in place, the airline operates at least flights according to the guidance of the authorities. The Ministry of Transport has proposed reducing some taxes and fees for the aviation industry, including lowering landing and takeoff costs and jet fuel.

However, once the social divestment measures are lifted, the number of flights to/from Hanoi - Ho Chi Minh City will increase to 26 from the previous one, and the airlines will also catch The first step is to increase the frequency of domestic flights. In addition, airlines such as Vietnam Airlines and Vietjet have served special return flights. This will likely continue as more Vietnamese people trapped in other countries seek to return to Vietnam.

Although it may take some time, the growth of the aviation industry will be linked to the domestic tourism and tourism business. However, the signs all show a promising future. Vietnam's aviation market is one of the fastest-growing aviation markets in the world with large capacity airports. The Government knows that the industry's long-term growth is sustainable and has continued to develop airport projects such as Long Thanh Airport, which will replace the current airport in Ho Chi Minh City by 2025.