Tuesday 26, 11 2019
Especially, encouraging the development of raw materials to meet the processing and production requirements of foreign investors should be paid more attention. 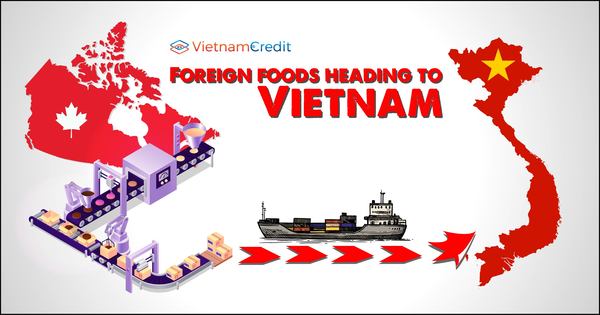 Imports of foreign food have constantly increased, while more and more foreign capital flows into food processing industry as Vietnam is a potential consumer market and has many opportunities for foreign investors thanks to free trade agreements (FTA). “Last year, Canada's agricultural and seafood exports to Vietnam reached a turnover of CAD 312.7 million. We hope that Canadian premium products such as seafood, agricultural products, and beverages can enter new market like Vietnam” Keith said. The Minister of Nova Scotia province said that Canadian food businesses are looking to shift their focus to the Vietnamese market after conquering the Chinese market. The CPTPP is a major cause of this shift.

For example, Canadian frozen meat products exported to Vietnam, said Minister Keith Colwell, will have a bright future due to the fact that products manufactured in Canada often meet strict standards, and are of high & premium quality. There will be not much room for other competitors.
It can be seen that Vietnam's food market is being considered a "fertile land" for many types of imported foods and foreign investors when FTAs come into effect. To be more specific, in the first 9 months of this year alone, Vietnam imported more than 14,824 tons of pork of all kinds with a total value of USD 29,177 million, exceeding the import amount of last year’s 14,295 tons with a total turnover of USD 23,625 million.

The attraction of foreign capital into the food industry has also become increasingly active. According to experts, Vietnam has signed 13 FTAs (of which 12 have entered into force) and is negotiating 3 other FTAs, so FDI inflows in this field have been and will be increasing sharply in the time to come.

Mr. Le Hong Minh, Director of the Center of Investment Promotion for Industry and Trade Development (Trade Promotion Agency, Ministry of Industry and Trade), said most of FDI projects in the field of food processing are located in such major cities as Hanoi, Ho Chi Minh City, Binh Duong, Dong Nai and Long An.

The total FDI capital pouring into food processing in Vietnam so far is estimated at USD 11.2 billion with 717 projects (excluding projects of which foreign investors buy shares or conduct mergers and acquisitions).
According to Mr. Minh, there are still gaps in the rate of FDI investment among sectors within food processing industry. Foreign investors often focus on quick capital recovery projects such as processing agricultural & aquatic products, and beverages.

However, these FDI enterprises have little or no investment in developing materials. Therefore, the "supporting" industries for food processing including cultivation and husbandry have not been developed under a modern and standard model. Not to mention that foreign capital flows in the food sector mainly come from Asian countries including Thailand, Malaysia, South Korea and China, whose products are manufactured and consumed right in Vietnam market.

Meanwhile, products of countries with developed food processing industries such as Japan, the United States, Australia and the EU are constantly exported to Vietnam. Attracting enterprises from these countries to invest in food processing is quite modest, although Vietnam has had relatively attractive investment incentive policies.

Mr. Minh also pointed out that domestic raw materials have not yet met the production of FDI enterprises in the field of food processing. For example, the dairy industry can only meet about 25% of production demand while 90% of cooking oil materials are imported. Main materials such as Malt, Houblon flowers and Enzyn preparations have not been domestically produced yet, so they still have to be imported.

According to experts, it is necessary to promote technology transfer of developed countries in the field of processing, packaging and preserving agricultural and fishery products to Vietnam. Especially, encouraging the development of raw materials to meet the processing and production requirements of foreign investors should be paid more attention.
Source: tapchitaichinh
Categories:
Financial News Privacy Policy Developments Investment Business

Because the Covid-19 pandemic has been well-controlled in Vietnam, many...