Thursday 09, 07 2020
As of July 1, the credit increased by 3.26%, a relatively strong increase starting in May, while the highest foreign exchange reserve ever. 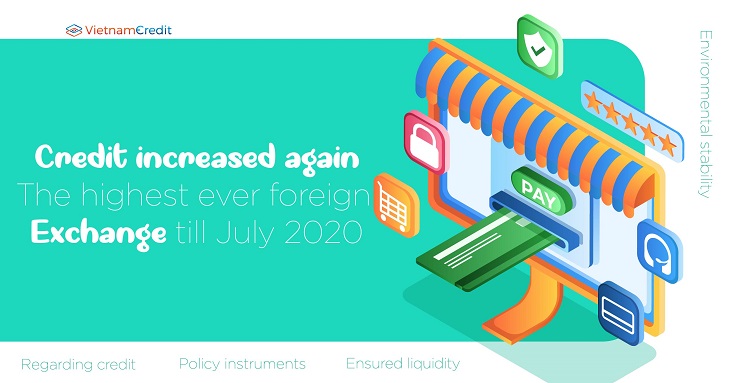 In the first 6 months, SBV actively and flexibly used monetary policy instruments, ensured liquidity of the economy and the banking system, but maintained inflation control and environmental stability. business.

The inflation result of the first 6 months at 2.81% showed that flexible monetary policy management, contributing to maintain the average inflation rate of about 4.19%. This is an important factor to create the foundation and maintain the confidence of the community of domestic and foreign investors in the environment and macroeconomic stability of Vietnam.

For interest-rate solutions, in the first 6 months, the State Bank of Vietnam (SBV) twice decreased the operating interest rate at a very strong rate of 1.5%; Combined with that is the very resolute direction of credit institutions (CIs) to reduce costs, reduce profits as well as reduce bonuses to reduce lending rates. Therefore, the lending interest rate level for the economy, including existing loans as well as new loans, has been sharply reduced.

Regarding the exchange rate management, according to the Governor, in the first 6 months, the VND rate was quite stable, maintained within the range of 0.2-0.3%, and we reached the highest level of foreign exchange reserves. ever. Maintaining exchange rate stability has contributed significantly to stabilizing inflation. This is also an important factor for credit rating agencies to maintain Vietnam's credit rating, as well as maintain investor confidence, especially this is also an element to attract investment. contribute to recovering the economy in the coming time after the epidemic.

Since the beginning of July, the SBV has been actively adjusting credit to support growth, so it has recently adjusted the credit growth targets of a number of commercial banks (including commercial banks). State capital or private-owned commercial banks, in order for banks to have healthy growth conditions in the fields serving economic growth, credit growth can be adjusted at a higher level than demand.

To support sharing of solutions to remove difficulties for the economy, the SBV issued Circular 01/2020 / TT-NHNN with breakthrough solutions to restructure debt, not to transfer debt groups, and During the debt restructuring period, borrowers are not required to pay principal and interest due and enjoy interest and fee exemptions and interest rates.

These are strong solutions, together with the SBV, has organized the SBV's Board of Directors to a series of localities, key economic regions, working directly with associations and credit institutions to listen to the public. co-businesses and immediately remove practical difficulties. Sharing the operating direction from now until the end of the year, the banking system and the SBV affirmed that the objective of operating monetary policy under the Government's direction is to control and maintain macro stability but set the goal to support. support economic growth. Therefore, the banking system will continue to commit to fully and promptly provide capital to the economy, will operate the exchange rate stably, and be ready to take necessary measures to intervene in the market if there are fluctuations. excessive macro instability. The SBV will also continue to direct credit institutions to thoroughly reduce costs and reduce profits to reduce lending rates, as well as ensure the safety and quality of operations of the credit institutions system. Recently working with localities and listening to the recommendations of the Chairman of the Government Office, the State Bank will consider soon revising Circular 01 in the direction of extending the time of debt restructuring. until the end of 2020, as well as new loans after the Prime Minister announced that the translation from  January 23, will also be considered to allow restructuring. SBV is willing to increase credit limits for credit institutions from now to the end of the year to support growth. In case of necessity under the direction of the Government, there will be stronger measures on monetary policy such as refinancing projects with spillover effects to support key economic areas, as well as support for growth from now to the end of the year.

The Prime Minister stated that price control must promote development, stimulate growth, curb inflation but not tighten monetary. Credit this year must grow at least 10%. The public debt ratio may increase by 2-3%. There must be appropriate mechanisms, policies, and solutions to strongly stimulate key economic growth drivers including investment and consumption. The State Bank of Vietnam directed to continue effectively implementing the policy of debt rescheduling, interest rate waiver, and cost reduction for new and existing loans. Commercial banks must share with the business at this time.