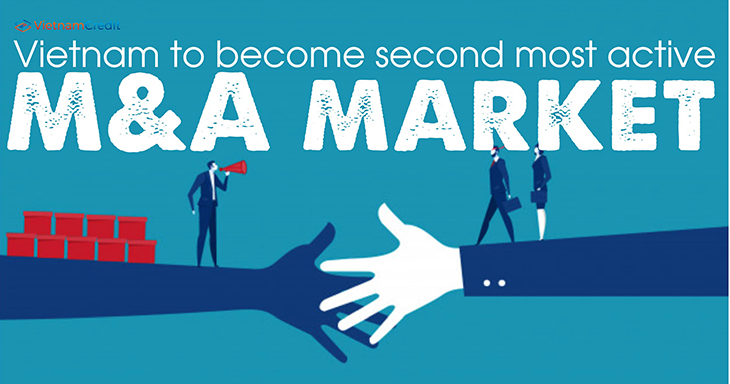 Euromonitor's mergers and acquisitions environment attractiveness index indicated that Vietnam is one of the two most dynamic and potential M&A markets in the world. Vietnam scored 102 for this year and 94.6 for 2021.
While other economies recorded dramatic declines during the same period, such figures are significantly higher than last year (which was 74), showing a bright outlook for the market. In addition, Vietnam is also in the top 5 markets with the fastest M&A performance growth in the world, behind Singapore, Ireland, the Philippines and Qatar.

Euromonitor said that there will be more M&A deals in the construction, distribution network, manufacturing and public infrastructure industries in the coming time. These sectors in particular and the Vietnamese economy in general have benefited from the fact that EU and other developed countries have decided to diversified their supply and become less dependent on China. According to the Ministry of Planning and Investmentt reached about 10.1 billion USD in 2018, an increase of 60% over the same period in 2017, and reached about 15.6 billion USD last year, an increase of 54% yoy.
Consumer goods production and real estate were the two industries with the most M&A deals in 2018 and 2019. Other industries with high number of M&A deals are consumer finance, retail, fisheries, logistics and education. Investors from Korea, Japan and Singapore play a very important role in the M&A market in Vietnam in 2018 and 2019.

In its mid-June report, the Vietnam-based European Business Association believed that Vietnam’s M&A market will be even more active 2020 because this is the time when many foreign investors seek to enter the Vietnamese market to take full advantage of the free trade agreements that Vietnam has signed.

Euromonitor informed that between 2015 and 2019, China and the US were the two most dynamic M&A markets in the world. However, the global economy is changing because of the US and China trade war. Moreover, domestic economic and political reform in Southeast Asia countries will also make it an investment hub.
The M&A environment has changed over the past 5 years, and there have also a lot of changes in the structure of M&A deals.

Mr. Vu Dai Thang, Deputy Minister of Planning and Investment, said: “The Government is formulating mechanisms and policies to promote the private economic sector to develop, and to create favorable conditions for private economic to participate in the restructuring of businesses through capital contribution, share purchase…". The Ministry of Planning and Investment has asked the National Assembly for approval of the amended Investment Law and Enterprise Law. These laws will soon be adjusted to remove problems, eliminate overlaps, cut costs of market entry procedures.

A number of new laws will be formulated and enacted such as the Law on Small and Medium Enterprises Support and Law on Investment in the form of PPP. This will create a more solid legal framework for the participation of the private sector in the fields of business investment.

However, apart from the Government's policies, at present, there are not many third parties who can support mergers and acquisitions activities in Vietnam, especially the support for foreign investors.
When buying shares or merging with any business, the most important thing for investors is to understand their partners to avoid unnecessary risks. This means investors must have all information about their partners, including financial and non-financial information.

With more than 20 years of experience in the field of business information, owning huge data sources and diversified information networks, VietnamCredit has provided Due Diligence and M&A consulting services to foreign investors. Our services include on-demand information about businesses, financial due diligence, legal and tax filings, and other information for successful M&A deals.
Please contact us via email [email protected] for more advice and support.