Tuesday 26, 11 2019
The prospect of gloomy global economic growth coupled with the escalation of the US-China trade conflict has weakened investor sentiment. 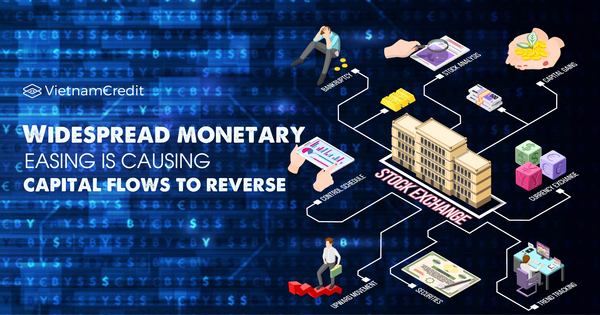 According to SSI experts, due to the sharp increase in prices and the loosened monetary space of major central banks, the market has started to talk about the worry about bubbles in the bond market. While stocks have emerged as potential investment channels in traditional investment channels.Analysts of SSI Securities Company (SSI Research) have just released a report on global capital flows in November 2019.

Signal Of Reversal Of Capital Flows

According to the report, after strong capital withdrawal in 2017, stock investment funds were able to retain capital inflows for most of 2018. However, the pressure of the 4th rate hike in December 2018 has started the movement of capital flows from stocks to bonds. In the 11 months from December 2018 to October 2019, USD 277 billion was withdrawn from stock investment funds globally. This is the strongest and longest capital withdrawal of stocks in the last 4 years. At the same time, bond investment funds had a capital inflow of about 372 billion USD.

The prospect of gloomy global economic growth coupled with the escalation of the US-China trade conflict has weakened investor sentiment. Worried about risks, cash flows to safe-haven channels are bonds, gold, and defensive currencies, directly causing the price of these assets to rise sharply. In only June 3, 7 and 8, gold prices have increased by over 20%. US government bond yields fell sharply and also hit the bottom in late August.

In response to the slowdown of the US economy caused by the trade war, FED has changed its monetary policy from tightening to loosening with 3 times lowering interest rates since July. Interest rates and equity investment funds all recorded inflow; however, it was not until the 3rd drop at the end of October that the capital inflows into stocks only recorded positive 3 consecutive weeks. Stock funds in both emerging and emerging markets are inflow, most of which are global investment funds and in the form of ETFs.

The latest 12 November 2019 survey by Bank of America Merrill Lynch shows positive changes in economic growth prospects and changes in asset allocation. 43% of fund managers expect economic growth to improve over the next 12 months - an increase of 6% from 37% in the October survey and the strongest monthly increase since 1994 to present; and 52% believe that stocks will be the most effective investment channel in 2020.

The S&P 500 and Dow Jones stock indexes have increased by 23.4% and 19.1% since the beginning of 2019 thanks to the reversal from tightening policy to loosening of FED and the still stable economic indicators of America. The indicators of the probability of crisis of the US economy all dropped in the latest announcement. With signals from the economy, monetary policy and investor surveys, the current moment may be a time when investors realize that they may miss the opportunity to invest in stocks and need to change the asset allocation strategy.

Despite the trade-off of inflation and the risks of the credit system to stimulate growth, the risk of China's economic recession is still clearer. GDP growth declined for 5 consecutive quarters and in Q3 / 2019 fell to 6% YoY, the lowest level in nearly 3 decades, lower than the growth target of 6% -6.5% in 2019. Signs are so clear that the Chinese government cannot hide them anymore. A report by the National Institute of Finance and National Development of China forecasts a 2020 GDP growth of only 5.8%.

Slower global economic growth coupled with trade wars have led to a decline in the manufacturing industries of all countries. The PMI index of the US, UK, EU, Germany, and Japan has continuously decreased and is now below 50. The loose monetary policy continued to be maintained with interest rates of -0.1% in Japan, 0% in the EU, 0.75% in the UK and 1.5-1.75% in the US. The wave of monetary easing spread widely with a total of 139 interest rate cuts by central banks since the beginning of the year, including some central banks reduced by 3-4 times. Interest rates in some countries such as South Korea and Thailand are at historic lows. A large number of government bonds were bought by central banks to increase the money supply to the market. Meanwhile, an increased risk made investors come to VGBs more and caused VGBs yields to fall deeply in 2019 and are at the lowest level in history. Geophile price of government bonds has therefore decreased significantly. Due to the sharp increase in prices and loosened space of large central banks, the market has begun to talk about the anxiety of the bubble in the bond market.

Still, be cautious with the risk of capital reversal

However, according to the analysis group, investors should be cautious with such reversal capital flows.
Stocks in emerging markets have a clearer relationship to capital inflows of investment funds than to developed markets. The MSCI Emerging market index has had a rise of more than 4% in the past 3 weeks, when about USD 5.2 billion has been flowing into emerging market stocks and amid temporary trade tensions.

Confidence in efforts to improve trade relations with China before the US election in 2020 and the period of cheap capital around the globe has spurred investors to return to stocks. However, the increasing capital flows in the last 4 weeks in EM focused on global investment funds and most of them were poured in through ETFs, so the capital inflows were fast but could also get out quickly.

The trade war is still the biggest risk that can reverse capital flows. Since the first declaration of tariffs on US $ 50 billion of Chinese goods on June 15, 2018, the capital flows of stock market funds in emerging markets (except China) had a strong withdrawal lasting for 6 consecutive months and reversed in the following 5 months of the armistice.

The second truce lasting exactly one month (July 2019) also made the outflow of capital. The current period can be considered as the 3rd armistice and capital flow movements are also very compatible. Therefore, any negative signals from the US-China trade war can also have a strong impact on capital trends in emerging markets.

Particularly for China, the flow of investment flows back to the country to support the economy from the second half of 2018 has started to decline. It seems that the investment capital that Beijing can dominate has reached the limit while the gloomy developments of the domestic economy have caused the inflow of capital to leave China. According to EPFR data, capital outflows from Chinese equity funds is about $ 10 billion.