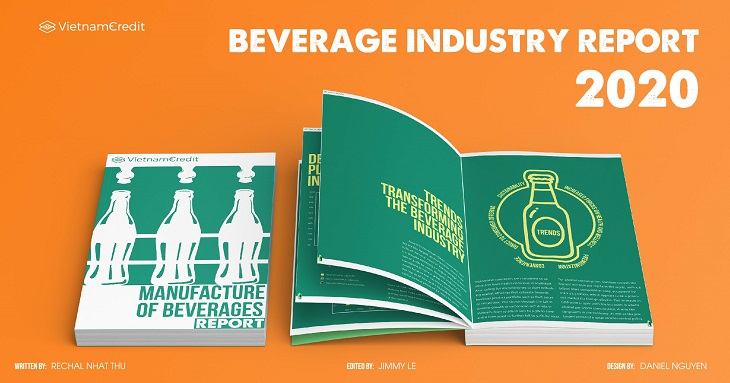 The list of top alcoholic and non-alcoholic drink providers was made based on the evaluation and ranking of their charter capital, revenue, profit, total assets, etc. and objective judgments of VietnamCredit’s experts.

Vietnam’s beverage industry is rapidly expanding, aided by economic growth, advantageous demographics, rising tourism and higher middle-class income. With an annual growth rate of 6%, the sector is a major driver of Vietnam’s economy, with the highest production value and the 2nd highest total revenue.

Vietnam has one of the highest per capita beverage consumption markets. Compared to 2010, Vietnam's alcohol consumption has increased by nearly 95%, ranked first in the world, doubling the second-ranked country (India), and 16 times higher than the United States.

Beer is currently dominating Vietnam’s beverage industry. Beer sales account for more than a half of all beverage revenue. Taking over 40% of the market share is Sabeco. However, at the end of 2017 Sabeco was acquired by ThaiBev (Thailand), making this potential sector mainly controlled by a foreign firm.

Vietnam’s Government has planned to decrease its stake in state-owned enterprises to encourage the country’s private sector, supporting the positive outlook for Vietnam’s beverage industry. This, accompanied by Vietnam’s membership in WTO and many free trade agreements such as CPTPP and EVFTA, aims to attract multinational companies to invest in the drink sector as well as generate opportunities for Vietnamese companies to increase exports.

Projected revenue in this segment will amount to USD 7.098 million in 2020 with an expected growth rate of 6.5% in 2023, mostly accounted for by soft drinks.

Per capita consumption shows rapid growth under the positive influence of consumer choices. The young (under 24 years old) account for 40 percent of the country’s population, demonstrating sustainable growth in the soft drinks sector. Healthy lifestyle choices will significantly change the industry when 83 percent of consumers choose healthier products over sugary ones.

With the fastest growth in the fast-moving consumer goods (FMCG) industry, the volume sales of soft drinks and carbonated soft drinks in Vietnam is likely to reach 3.3 billion and 1.5 billion liters in 2020, respectively.

Although being the only two major foreign firms in the segment, Coca-cola and Suntory Pepsico largely dominate the market by taking over 64% of the market share, followed by two domestic players Tan Hiep Phat and Trung Nguyen. 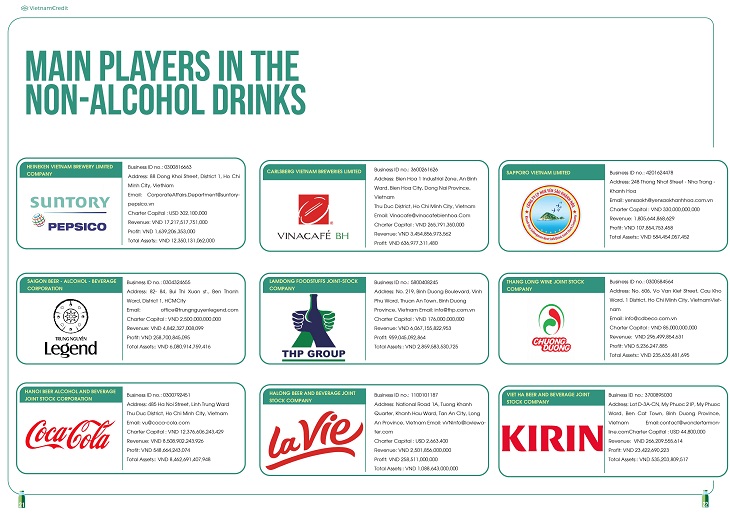 Vietnam is associated with a beer drinking culture. Currently, the country is the biggest beer market in Southeast Asia, and ranked 3rd in Asia and 15th in the world in terms of beer consumption. The rapid growth rate of this market is very attractive to foreign investors, making this sector highly competitive.

Beer revenue in 2019 was USD 7.7 billion and is expected to reach USD 8.2 billion in 2020, with an annual growth of 5.5% in the period of 2019 – 2023. The consumption growth rate is remarkable and consistent over time: allied to the developing population, Vietnam’s beer industry combines all the most favorable criteria for sustainable development.

However, it is not simple to enter this sector. Only the investment units based on the value chain from materials, logistics to distribution systems, alongside strong financial resources for new marketing strategies will succeed in market penetration. Big players like Sabeco, Habeco, Carlsberg and Heineken are taking over 90% of the market share. Competition in this segment is relatively intense.

In comparison with other markets in the world in terms of revenue, Vietnam’s wine and spirit sector is relatively small, with an annual growth rate remaining at around 4%. In addition to wine and spirits production, revenue comes from Cider, Perry and Rice Wine.

According to the WHO estimation, unofficial / non-statistical alcohol (mostly self-brewed alcohol) accounts for 64% of total alcohol consumption. These wines have a high alcohol content (up to 40% ABV), are popular and are widely consumed in non-central cities. Despite the negative impact of the Covid-19 pandemic, Vietnam’s retail...