Saturday 08, 08 2020
The double effect of Decree 100 and the Covid-19 pandemic made businesses in the Vietnamese beer market struggle in the first half of 2020. 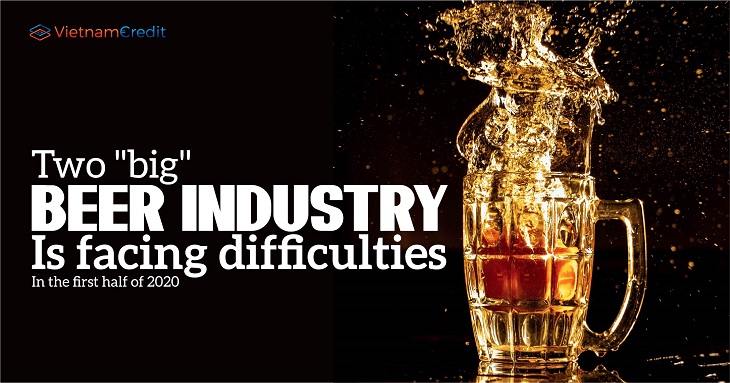 The Government's Decree 100 on sanctioning administrative violations when participating in traffic officially took effect on January 1, 2020, causing the consumption of alcohol and alcohol enterprises to drop significantly.

Although many enterprises in the beer industry have come up with their own solutions and campaigns to overcome difficulties, the second "shock" from the Covid-19 pandemic and the regulations on social gap has dealt a "fatal blow" to the Vietnam beer market. In which, the two "giants" in the industry are the Saigon Beer - Alcohol - Beverage Corporation (Sabeco, HoSE: SAB) and Hanoi Beer - Alcohol - Beverage Corporation (Habeco, HoSE: BHN) inevitable impact.

In the first quarter of 2020, Hanoi Beer suddenly saw a huge loss of nearly 100 billion dongs. This is BHN's second quarterly loss since being listed on the stock exchange. Previously, this enterprise had recorded a net loss of nearly VND16 billion in the fourth quarter of 2016.

In the second quarter, this "big man" went upstream quite spectacularly when it achieved a profit after tax of 245 billion dongs, up 2% over the same period last year. However, quarterly revenue still dropped by 13%.

To get such positive results, BHN has cut costs sharply. Specifically, financial and administrative expenses decreased by 23% and 5.8%, respectively, compared to the second quarter of 2019. Selling expenses - the largest proportion in the total cost reduced by up to 30%.

Closing the first half of 2020, the cumulative revenue of BHN decreased by 28% compared to the same period last year, reaching VND 2,892 billion. The first 6 months' net profit dropped sharply by 51%, only earned 147.3 billion dong due to heavy loss in Q1. With Sai Gon Beer, the scale is bigger so the impact is more pronounced.

Specifically, revenue and profit after tax of the second quarter of 2020 of Saigon Beer are down 20% over the same period in 2019, respectively, reaching VND 7,135 billion and VND 1,215 billion. Compared to the gloomy business results in the first quarter (profit after tax: 716 billion), the results earned in the second quarter of 2020 of SAB has also been a significant improvement.

By the end of the first half of 2020, Sabeco's accumulated revenue and profit in the first 6 months were VND 12,044 billion and VND 1,932 billion respectively, down 34% and 31% compared to the same period last year. One common point of SAB and BHN is that the leaders of these two enterprises are quite timid in the context of common difficulties. This is evidenced by the business plans of both SAB and BHN in 2020, which are deeply lower than the level implemented in 2019.

Specifically, Hanoi Beer expects revenue and profit after tax in 2020 will decrease by 43% and 50.6% respectively compared to 2019, respectively VND 4,238 billion and VND 248 billion. Thus, the first half of BHN's results achieved 68% in revenue and 59% in profit.

Similarly, Sai Gon Beer also set a business plan in 2020 with revenue and profit after tax respectively reduced by 37% and 39% compared to the level in 2019. Therefore, despite the decrease in revenue results Decreased sharply but still finished the sale.

With such effects, besides the after-tax profits and revenue, if you want a more specific look, looking for the report: SABECO & HABECO