To stabilize the money market, create conditions for further reduction of interest rates 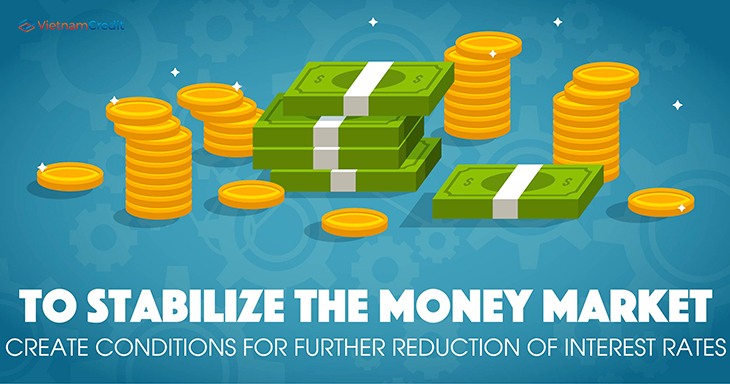 With complicated developments in the Covid-19 pandemic, the Governor of the State Bank recently sent documents to the SBV's units, credit institutions, and foreign bank branches (hereinafter referred to as Credit institutions) on the implementation of the tasks in the last months of 2020. The Governor requested credit institutions to strictly comply with the instructions of the Government, the Prime Minister and the State Bank on reducing operating costs, reducing salaries, bonuses, and profits to continue continuously reducing interest rates for existing loans and new loans, supporting and accompanying businesses and people to overcome difficulties, contributing to the recovery of production and business after the epidemic. Comply with SBV's regulations on lending interest rates for 5 priority areas as directed by the Government.

Right after that, many banks continued to move to further reduce deposit rates. For State-owned commercial banks, Vietcombank has adjusted the deposit interest rate for a 1-2 month term to only 3.5% / year from 3.7% / year at the beginning of August. 3.5% / year is also The lowest interest rate for 1-2 month term is applied by BIDV, VietinBank, and Agribank after being adjusted to decrease. For 3-month term, the 4 SOCBs also decreased from 4% / year to 3.8% / year; 9-month term decreased from 4.6% / year to 4.5% / year; For terms from 12-24 months, interest rates of all 4 banks are down from 6.5% / year to 6% / year. According to experts, the banks tend to lower deposit rates, according to experts, in the context of low credit growth due to the impact of the Covid-19 translation, reducing the ability of the economy to absorb capital. The liquidity of the system is still abundant. Indeed, according to the State Bank of Vietnam, as of July 28, 2020, credit increased by 3.45% compared to the end of 2019, capital mobilization increased by 5.31%.

Analysts of SSI Securities Company forecast that from now to the end of the year, interest rates can decrease by 0.5-0.7% for less than 12 months and 0.2-0.3 points % for terms of 12 months or more.

From the beginning of the year until now, the State Bank has reduced the operating rate twice (March and May 2020). The deposit and lending interest rates of credit institutions tended to decrease compared to the beginning of the year after the ceiling of interest rates for short-term deposits and loans were also adjusted down by the State Bank. As of September 2019, the ceiling lending interest rate for priority sectors has decreased by 1.5% / year, currently at 5% / year, close to the short-term deposit interest rate of credit institutions, expressing the message strength of the banking industry in continuously reducing lending rates, removing difficulties for customers to borrow capital.

Currently, Vietnam's lending interest rates are also average compared to other countries with similar development levels in the region. However, the recent wave of lowering deposit rates will create more conditions for banks to further reduce lending rates.

Talking more about this point, Assoc. Dinh Trong Thinh said that there is room for the State Bank to intervene in interest rates and exchange rates. According to Mr. Thinh, Vietnam's foreign exchange reserves have increased sharply compared to the previous time. In addition, although interest rates have fallen relatively deeply, there is still room to decrease if necessary, though not much. Inflation is maintaining at a low level, plus a stable exchange rate from the beginning of the year until now are also conditions for interest rates to have a chance to further decrease.

TS. Nguyen Tri Hieu commented that the move from the authorities has added another step to remove difficulties for commercial banks, help stabilize the interest rate level, and thereby also reduce the pressure to mobilize capital at a time when Covid-19 translation continues to have complicated developments affecting the entire economy, industry, and field. Without the pressure to mobilize, banks will have more opportunities to reduce deposit rates, thereby reducing lending interest rates, stimulating demand for loans in the economy. Currently, the State Bank is also studying and synthesizing ideas to proceed to issue a Circular amending and supplementing Circular No. 01/2020 / TT-NHNN in order to continue implementing solutions to restructure the repayment period and exemption, reducing interest and fees, keeping the debt group for customers.

TS. Can Van Luc share that monetary policy has brought into play very effectively for businesses and the economy, when in fact the debt extension and restructuring for customers were affected by Covid-19 of Vietnam. In terms of GDP, the South is the second-largest in comparison with many countries in the region. Taking the case of VietinBank, Chairman Le Duc Tho said that, implementing Circular 01 of the State Bank of Vietnam, up to now, VietinBank has supported to lower interest rates up to 2%, an average of 0.6% / year for nearly 9,000 customers with outstanding loans amounting to more than 242 trillion dongs; the structure of principal and interest for more than 8.4 trillion dongs, principal and interest balance of nearly 1.7 thousand customers. Vietcombank also restructured the repayment term, exempted and reduced interest rates, kept the debt group intact under Circular 01 of the State Bank of Vietnam with the rescheduled loan balance remaining the debt group of 11,761 trillion dongs; Total outstanding loans interest rate reduction is about 200.8 trillion ...

SBV Governor Le Minh Hung affirmed that in the coming time, the State Bank will continue to regulate interest rates in accordance with macro balance, inflation, market developments in order to stabilize the monetary market and create conditions for credit institutions. stabilize, reduce interest rates. From there, creating favorable conditions for credit institutions to reduce interest rates, contributing to supporting people and businesses to gradually overcome difficulties, and quickly restore production and business.