The Vietnamese manufacturing sector will continue to develop positively in 2020

Friday 03, 01 2020
After a slight decline in recent months, Vietnam's manufacturing sector remains in a positive state as companies are ready to take advantage of opportunities that will come in 2020 Business conditions in Vietnam's manufacturing sector improved in December thanks to a faster increase in new orders.

The PMI in December reached 50.8 points, slightly lower than the 51 points in November and signaled a small improvement in manufacturing health. Business conditions have improved throughout the period from the end of 2015, except for October, which is the month of no change. The number of new orders by the end of 2019 has increased for the 49th month in a row, and survey respondents attributed the increase in customer demand.

The pace of increase is the strongest and fastest in four months. The total number of new orders recorded increased despite a decrease in the number of new export orders, and this was the first decline in more than four years.

Meanwhile, companies have used inventory to meet orders. As a result, finished product inventories fell for the 3rd month in a row.

Manufacturers have responded to an increase in new orders by increasing the number of employees and increasing purchasing activities. Employment rose for the second month in a row, and the increase was concentrated in intermediate goods manufacturing companies. Purchasing of input goods also increased for the 2nd month in a row, although the increase was lower than in November.

Meanwhile, the supplier's delivery time was slightly extended when some survey team members reported a delay in import delivery. Input costs increased sharply at the end of the year, with a faster pace of growth and becoming a 7-month high. Survey respondents often cited a rise in the market price of raw materials. However, the inflation rate is still weaker than the average of the index history. The transfer of cost increases to customers has caused manufacturers to increase their selling prices in December. This is the second increase in the past 3 months, but the increase is only slight. 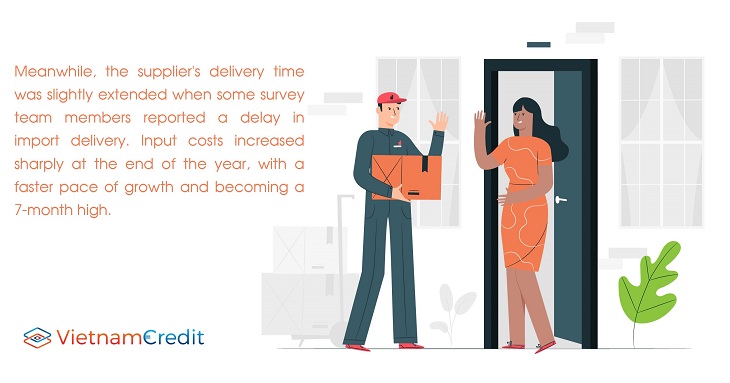 Plans to increase output in the context of increasing new orders led companies to expect production to increase next year. About 39% of survey respondents forecasted an increase in production, with the level of optimism unchanged from the previous month. Commenting on Vietnam's PMI survey data, Andrew Harker, Deputy Director at IHS Markit, said the index in 2019 was generally positive. Especially, the number of new orders increased at the fastest pace since August.

"While output is declining, survey respondents commented that this situation was at least partly due to problems with the production process, and therefore hopes to improve temporarily, especially when the number of new orders continues to rise sharply. After a slight decline in recent months, Vietnam's manufacturing sector remains in a positive state as companies are ready to take advantage of opportunities that will come in 2020, "he said.