Wednesday 15, 01 2020
Vietnam continues to be on the Monitoring List even though it only meets one criterion of bilateral trade surplus 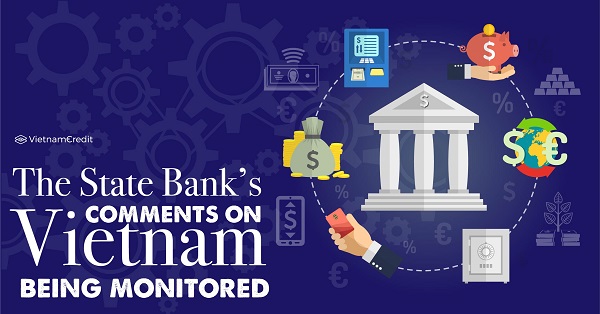 The move of the US

In the afternoon of the same day, the State Bank of Vietnam officially spoke out about the latest move of the US.

Specifically, according to the State Bank's Monetary Policy Department, in accordance with the US Trade Promotion and Promotion Act of 2015, the Ministry of Finance of this country needs to conduct advanced analysis of exchange rate and foreign economic policies of major trading partners that meet the criteria of bilateral trade surplus with the US, current account surplus and foreign currency intervention.

These criteria have been specifically quantified in the January 2020 Report as follows:

Earlier in the May 2019 Report, Vietnam became one of the nine countries on the Watch list for the first time because it met two criteria for bilateral trade surplus with the US and current account surplus. The May 2019 report also states a country on the Monitoring List will continue to be monitored for the next two reporting periods.

According to the Monetary Policy Department, in the January 2020 Report, Vietnam continues to be on the Monitoring List even though it only meets one criterion of bilateral trade surplus: With Vietnam continuing to be on the Watch List, in the coming time, the US Treasury Department will continue to monitor trade and current information and data, current balance and macroeconomic and monetary policies of Vietnam and may continue to discuss and work with relevant Vietnamese agencies if necessary.

The comments of the State Bank of Vietnam

The State Bank of Vietnam said it would continue to coordinate with the concerned ministries and branches to discuss and work on issues of concern by the US Treasury Department in a spirit of cooperation and at the same time at the same time continue operating monetary policy to control inflation, stabilize macro-economy, support reasonable economic growth, flexibly regulate exchange rates, in line with macro balances, market movements and monetary policy objectives, so as not to create unfair international trade competitive advantage.

Earlier, at the Banking Industry Conference 2020 held on January 2, Governor of the State Bank of Vietnam Le Minh Hung affirmed: One of Vietnam's priorities in 2020 is to continue working with major trading partners to prove that Vietnam does not manipulate money.

"The State Bank never uses the exchange rate to create competition with trading partners, and does not intentionally intervene in monetary policy to facilitate the import and export of goods. Vietnam does not manipulate the currency. "Said the Governor.

In 2019, the State Bank has also actively coordinated with ministries and agencies to work with partners, affirming that Vietnam operates currencies and exchange rates according to market movements and does not use the exchange rate to compete in trade, and to create inequality for partners which Vietnam has trade relations with.