The adverse impacts deducted from the 'talking numbers'

Thursday 12, 03 2020
Besides the decelerating credit and the revenue that is unlikely to achieve its goals, banks are also having to face other negative consequences of the Covid-19 virus. 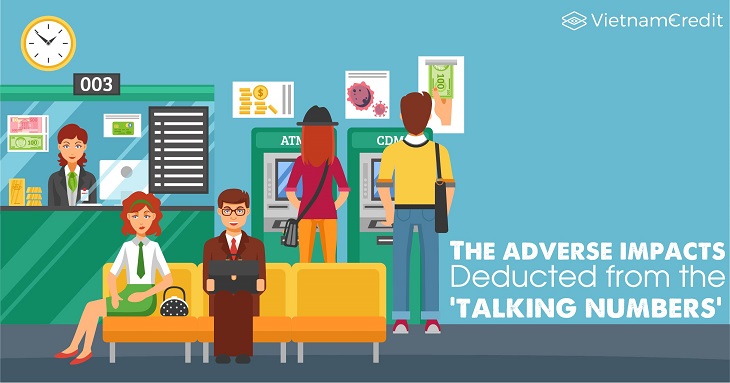 Finance - Banking Expert Nguyen Tri Hieu said that since banks were dependent on their customers, they would naturally be affected if their customers faced difficulties. Therefore, this year, the banking sector should not expect high profits, as even the goal of reducing bad debts is at risk of not being achieved.

Difficult to maintain the profit target

Nguyen Quoc Hung, Director of the Credit Department of the Economic Sectors (of the State Bank of Vietnam- SBV), said that outstanding loans from sectors affected by the epidemic had been about VND 925,000 billion, accounting for 11% of the total outstanding loans of the banking system.

Due to the severe impact of Covid-19, the system of credit institutions has implemented many measures to directly support and remove difficulties for customers affected by the disease such as debt restructuring, interest rate reduction, etc.

Experts said that the reduction of interest rates to support businesses affected by the Covid-19 epidemic will be difficult to avoid impact on banks’ profits, but this is considered the most appropriate solution in the current context since only strong businesses would be able to help banks develop.

According to Vietcombank estimates, Vietcombank's current loan balance with reduced interest rates is about VND 30,000 billion and the amount of interest rate reduction that Vietcombank gives to businesses is estimated at VND 300-450 billion. The bank targets a profit growth in 2020 which is 15% higher than that in 2019. However, this profit scenario of Vietcombank has not yet included the damage caused by the new Covid-19 virus. As for VietinBank, according to a senior leader, the outstanding credit balance is "within the industry average", but due to the complexity of the epidemic, "the level is still unpredictable”. Obviously, the issue of the bank's profit is also hard to avoid being affected.

Most recently, at the 2020 Annual General Meeting of Shareholders held last week, BIDV Chairman Phan Duc Tu admitted that the profit target set at the beginning of the year in the scenario of the disease ending in March had become difficult to achieve.

Therefore, the bank would adjust its profit plan in a necessary situation. The representative of the State Bank also admitted: “The damage caused by the Covid-19 epidemic is obvious, and credit institutions are also the subjects affected by the disease because lowering interest rates means using banks' own money to support businesses. "

Even so, Mr. Hieu said that banks can only reduce the level of damage to customers, while still having to ensure cost recovery. Therefore, to avoid falling profits, banks need to diversify their revenue sources.

However, the difficulty of reaching profit targets is not the only concern that banks are facing. The epidemic resulting in customers being unable to pay their debts on time and the increasing number of enterprises temporarily suspending their business and waiting for dissolution, which is higher than that of last year, have also raised concerns about the increasing debt risk.

Mr. Pham Toan Vuong, Deputy General Director of Agribank, said that Agribank had not yet assessed how many customers were damaged and the amount of damage, but it was certain that the disease would affect customers' repayment cash flow with the bank.

Accordingly, Vietnam's agricultural exports to China would be severely affected, while in Agribank's lending structure, agriculture accounted for 70%. This could also increase the risk of bad debt. From the middle of February, Mr. Nguyen Thanh Tung, Deputy General Director of Vietcombank also said that businesses with difficulty in cash flow might affect the bad debt ratio as well as provision level.

Eximbank's representative said that, according to statistics from the bank's business units, about 10% of outstanding loans of corporate and individual customers were affected by the disease. This problem occurred across the country, but it is most concentrated in Ho Chi Minh City, Nha Trang, Da Nang, and the southwestern provinces with the industries most affected being the hotel business, homestays, restaurants, resorts, entertainment, and export of agricultural products / supporting industries to the markets of China and South Korea.

"Until now, Eximbank has been urgently handling the proposal of 515 customers with a total outstanding loan of VND 5,400 billion for supporting the extension, adjusting the repayment schedule ...", the bank said. At VPBank, the representative of the bank estimated that the total number of VPBank's customers affected by this phase would reach nearly 1,000 businesses and this number could increase in the near future if the epidemic were to be complicated.

According to the evaluation of Nguyen Duc Do, Deputy Director of the Institute of Economics and Finance (Financial Academy), The prospect of the banking industry is not as bright as in 2019, so when an epidemic breaks out, there will be more negative effects and worrying bad debts.

"It is likely that the bad debt this year will increase more than that of the previous year, and the increase will be more or less dependent on the domestic and foreign economic situation as well as the operation strategy of the banking industry in general, and of the credit institutions in particular, "said Do.