Friday 12, 06 2020
The Social Policy Bank has prepared 16 trillion VND for enterprises to loan with a favorable interest rate of 0% as payment for workers. 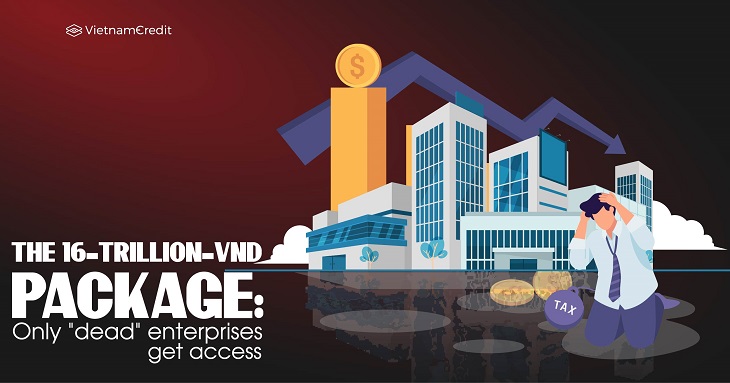 However, until now, none has been able to gain access to this package, as, according to enterprises, only “dead” enterprises will be able to fulfill the criteria of the Ministry of Labor, Invalids, and Social Affairs.

Being one of the business owners looking forwards to the 0%-interest-rate loan to pay the workers their salaries, General Director of Viet Thang Jean Limited Liability Company was disappointed as the file of the company was dismissed right from the beginning.

According to him, as COVID-19 occurred, many partners have temporarily stopped purchasing goods, interrupting the cash flow of the company. Currently, Viet Thang Jean is in need of loads of cash to pay its workers, as this costs them nearly 40 billion VND each month. However, their file was declined.

Viet explained that for the textile firms, during the time of ceasing the production of orders for partners, in order to keep their workers, many have shifted to producing masks and workwear, while continuously adjusting the work hours in several departments.

“Thus, in order to fulfill the criteria of the package, we must have to fire 20% of our workers. In addition, other criteria such as enterprises having to pre-pay workers 50% of their salary and having no revenue, etc. are of extreme difficulty to meet”, said Viet.

Head of the human resource department of the Vina Korea Limited Liability Company Dang Thi Mui also said that even though the company has submitted its file early, it still has not been accepted.

The reason for this is that the company failed to convert its land ownership certificate when it filed the documents. “We did not spot this in the regulations, yet the government authorities announced that the conversion was quired so they could determine our assets and finance. Besides, the list of labors of the company must also be carefully reviewed, and it must be redone if any mistake were to be spotted”, said Mui.

According to Mui, even though the social distancing order has been lifted, the company is still facing financial difficulties due to the supplies and output of its products not having been reconnected. “We still want to loan money, but we are not sure whether we will be able to meet the regulations and requirements in the next file submission.” Several enterprises said that even though they desire to get the supporting package, having to prove several issues relevant to financial and tax reports, etc. discourages them. In addition, the requirement of having no revenue makes most enterprises unqualified.

Director of the Detal International Limited Liability Company Tran Duc Nghia said that only dead firms would be eligible for the criteria of the salary payment loan with the interest rate of 0%.

According to Nghia, provided that they run out of money, enterprises will not be able to pay 50% of the salary of the out-of-work workers. Moreover, during COVID-19, enterprises were constantly having to think of a way to earn revenue from other activities to compensate for the serious reduction, thus no enterprise chose to do nothing to wait for the support package.

“After reading about this package, we have decided to ignore it, since if a firm were qualified for their conditions, it would have gone bankrupt. There is no such enterprise that can get this loan”, said Nghia.

Proposals to loosen the conditions

The Deputy Director of the Hanoi Department of Labor, Invalids, and Social Affairs Nguyen Hong Dan says that currently, Hanoi has only had 2 enterprises that have submitted their files for the 0%-interest-rate salary payment loan package. Their reason for this is that the requirements are too difficult to fulfill.

According to Dan, in order to support enterprises, the Ministry of Labor, Invalids, and Social Affairs may suggest that the government adjust the criteria, including loan conditions reduction, requiring enterprises to only prove their difficulties in paying workers their wages.

Director of the Ho Chi Minh City Department of Labor, Invalids, and Social Affairs Le Minh Tan says that by 10th June, there have been 43 enterprises with the needs to loan capital to pay their employees, yet none has received the money due to their failure to meet the conditions.

According to Tan, the majority of enterprises that failed to meet the conditions had only 20% of employees being suspended during the pandemic while arranging for the rest to work on shift and rotation. Therefore, this condition can be reconsidered.

Director of the Delta International Limited Liability Company Tran Duc Nghia says that to create favorable conditions for enterprises to get access to the supporting package, the authorities may base on the revenue of enterprises during the pandemic months, etc. Moreover, it is also possible to widen the loaning period to 6-12 months instead of the current 3-month loan, as it does not mean much to enterprises at the moment.

On the afternoon of 10th June, Deputy Minister of the Ministry of Labor, Invalids, and Social Affairs Le Van Thanh said that the Ministry was summarizing ideas and suggestions from localities related to the implementation of the 62-trillion-VND package. For lending the money to businesses with a 0% interest rate to pay salaries to employees, the Ministry is drafting a proposal to the Prime Minister to adjust some lending conditions, in the direction of reducing criteria.

According to the leaders of the Ministry of Labor, Invalids, and Social Affairs, so far no enterprises have been allowed to borrow from the 16-trillion-VND package, partly because the affected businesses have started to return to work and some businesses have accumulated funds to pay salaries. On the other hand, due to having to prove their finance, to some extent, businesses are afraid of affecting production and business activities, so they have not been proactive in preparing loan applications and confirming other support regimes for employees.

In the context of the outbreak of COVID-19 in Vietnam, the Vietnamese government...