Friday 18, 09 2020
In the past few years, Singapore has been showing surprising economic growth. However, is this upward trend is suitable for new businesses to grow in the future? 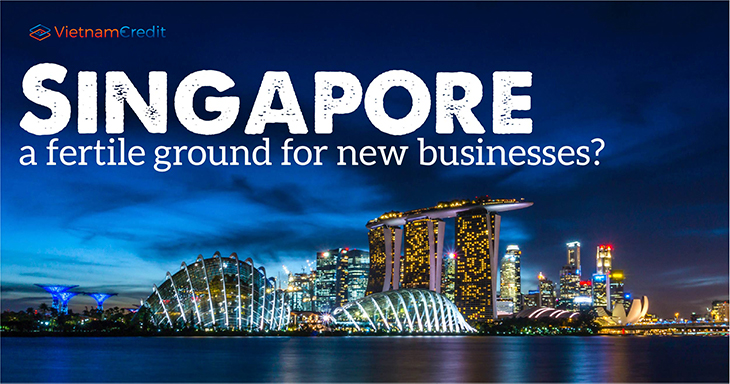 The Republic of Singapore is located in South East Asia which consists of the island of Singapore and 54 smaller islands and borders with Malaysia and Indonesia. The area of Singapore is approximately 710 square kilometers and it is one of the smallest countries in the world. Up until 2019, the population of Singapore is about 5.8 million people and the country has four official languages which are English, Chinese, Malay, and Tamil which resulted from the diversity in ethnics and cultures. Singapore is also one of the cleanest and safest countries in Asia and the world thanks to its strict rules and regulations.

Despite being a very small country, Singapore is a developed country and the center of various economic activities such as manufacturing, financial services, petrol, and trading. Besides, Singapore is also famous for various entertainment activities like shopping, dining, and many famous places to visit. About the export, as of April 2020, a total of 15/20 major export commodity groups in Singapore have experienced a sharp decline compared to the same period in 2019.  It can be seen that the COVID-19 pandemic had a direct impact on and a direct decline in Singapore's export performance in the first quarter of 2020. Directly affected groups are as follows:

The decrease in export shows that Singapore is slowly losing its advantages as a trading center. Comparative advantage refers to the ability of an economy to produce goods and services at a lower opportunity cost than their trading competitors. Singapore is located at a strategic location between other big markets like China, India, or Australia and also located in the heart of Southeast Asia and close to the surrounding emerging markets which they can easily and effectively reach out to other countries in Asia. Also, because Singapore is surrounded by water so they have to utilize their harbor system. Singapore is at the mouth of the Malacca Strait which about 40 percent of global maritime trade passes. Singapore is ranked the world’s leading maritime capital and it retains its position as the leading port of visit in Southeast Asia as a result of continuous upgrades to improve capacity and efficiency and despite fierce competition from competitors at lower costs. Also, Singapore has a diversified culture with having a mixture of Asian and Western culture and social systems. Besides, having English as the first language is also an advantage of Singapore.

Competitive advantage refers to the ability to produce goods or services of equal value at a lower price or in a more desirable way. The Singapore government is effective as the government is kept small and honest and it usually at the tops of surveys for the easiness of doing business. Furthermore, Singapore is very open to new ideas, talented people, and investment. They are open to foreign investment and trade, multinational companies found Singapore as a trading and financial hub, and they are encouraged to expand to this country. Singapore is a favorite location for many multinational corporations with more than 7000 companies is having headquarters and operating in the city-state and it also hosts 4200 headquarters operations at the regional level. Moreover, even though Singapore does not have any gas or oil resources and has limited land space, they still become a successful chemical hub of the world. Singapore can achieve success in the petrochemical industry thanks to effective land utilization, the ability to adapt to volatile markets, and pay adequate attention to safety and security.

➢   Challenges that Singapore is facing

Even though Singapore is a petrochemical center, the chemical value is falling from its peak at $7.36 billion to $3.98 billion in 2019. There are several reasons for this fall but the most prominent one is because of the competitors in the region namely Malaysia. Malaysia developed a regional oil and gas hub in Pengerang as its oil reserve tanks can attract traders looking for cheaper alternatives to contain their cargo, especially when the tanks in Singapore are completely occupied because of land shortage. Also, Malaysia is located strategically along with one of the busiest transport routes in the world, overlooking the Singapore Strait and has a deep-water harbor that can handle very large crude carriers bearing huge oil cargo and Malaysia also want to implement a liquefied natural gas (LNG) import terminal in Pengerang which can be a big change in Asian energy since the region is searching for cleaner and less risky fuel.

The trade war between the U.S and China also going to affect Singapore’s economy since both countries are among Singapore’s largest traders. Singapore has downgraded its growth forecast as Singapore’s growth for 2020 is now expected to come in between 1.5 to 2.5 percent, even though the previous forecast was between 1.5 to 3.5 percent. The war between the two countries had made an impact on the exports of Singapore which indicate the data above. The fall in Singapore’s exports reflects the fall in global demand for electronics which also includes the technology war between China and the U.S. Singapore is expected to be more affected when the two countries impose more trade tariffs on each other products.

There is also a threat that comes from the Kra canal project proposed by Thailand which can affect Singapore’s economy. The Kra canal is the proposed canal that will cut through Thailand’s Isthmus of Kra and then directly link up the Indian Ocean and the South China Sea and ships that carry crude oil and goods will not have to travel through the Straits of Malacca or ports in Singapore while travel to China and this would have significant negative effects on the shipping industry of Singapore which accounted around 7% of the entire GDP of Singapore.

As mentioned above, Singapore is facing a number of challenges that are affecting the country's economy, especially the shipping industry due to the trade war between the US and China and the Kra Canal mentioned. export. Singapore could also lose its position as the leading petrochemical hub as other competitors start to emerge at cheaper prices like Malaysia. Singapore will focus on regional trade in response to the impact of the trade war on Singapore's growth prospects, which is working to implement various agreements such as the Comprehensive Partnership Agreement and Trans-Pacific Progress (CPTPP) or EU-Singapore free trade agreement. According to a report by the Commission on the Future Economy points out the need for more business capital and recommendations to make things easier for venture capital firms operating in the country and Singapore should embrace and taking advantage of technological changes such as technological advances such as robots and artificial intelligence will bring rapid change to the country.

Besides, Singapore also has a few other factors that maximize support for new businesses in their home country.

Singapore is a country with thousands of startups, investment funds, and angel investors established every year. However, Singapore still has policies to encourage startups and developing startup incubators and Accelerators (organizations that accelerate startups). The typical advantage of these models is that new businesses will receive maximum support from large enterprises (experience, business know-how, access to markets, and product distribution).

In addition, the Singapore government also supports businesses in the form of loans, tax incentives for industries, and provides the essential infrastructure for startups.

Singapore is ranked first in the world for business incentive activities, one of the top politically stable countries in Asia has a good workforce in the world, and in particular, there are no taxes such as income tax, property tax, or inheritance law, ...

Moreover, the procedures for setting up a new company or business in Singapore will not take much time. On average, an enterprise-only takes up to 2 days to complete the paperwork for its company.

The Singapore government seriously takes intellectual property initiatives, ensuring that innovation flows are protected inside and outside the region, making it an attractive place for companies undertaking R&D activities - according to Tan Yinglan - founding partner and fund manager of Insignia Ventures.

Intellectual property represents an important asset to the startup's community. Enterprises with intellectual property rights will attract more investment because the assets can be liquidated and increase the value of the company. Intellectual property rights herein can exist in many forms: name and logo, design, patent, a creative project, or distinctive brand name may be solely by website IP address. International companies such as Microsoft, Facebook, Google, and Instagram all choose Singapore as their headquarters because of the high security of information networks.

Singapore has pioneered innovation support and has demonstrated to other regions that the benefits of government support to innovation are vital and essential.

Vietnam is one of a few countries forecasted by IMF to have positive growth...