Q & Me Report: Vingroup Dominates The Retail Market In 2019

Monday 11, 11 2019
The Q & Me report on the overall picture of the retail market in 2019 is changing rapidly with the strong growth 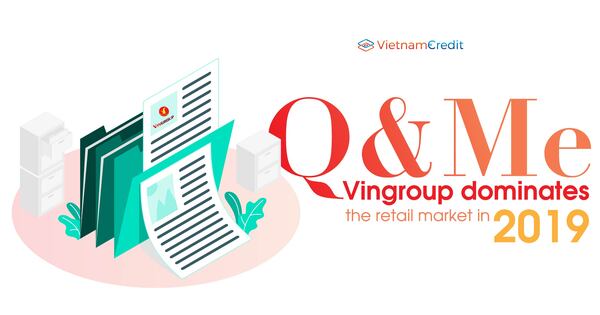 Market research reports from Q & Me show that Vingroup is leading the rise in modern commercial sales, with a dominant market share in shopping malls, convenience stores, and supermarkets.


The Q & Me report on the overall picture of the retail market in 2019 is changing rapidly with the strong growth of modern channel stores along with the sales of big corporations, in which Vingroup has completed many acquisitions of convenience store chains, mobile phone stores, department stores, etc.

Retail Sales Increased The Most Ever, With Vingroup Accounting For The Majority

According to the Q & Me report, retail sales reached $ 142 billion in 2018 - the highest ever recorded and expected to reach $ 180 billion by 2020. The compound annual growth rate (CAGR) is 13%. In particular, Hanoi and Ho Chi Minh City are the two cities with the strongest growth in modern sales channels. Ho Chi Minh City and Hanoi alone account for one-third of total revenue (Ho Chi Minh City is 22% more than double Hanoi's 11%).

Forecasting for the compound growth rate (CAGR) of convenience store retail sales in the period of 2017-2021, Q & Me stated that the number of CVS will continue to increase. The CVS sales are expected to increase by 37.4% CAGR until 2021.

There Will Be More Mergers Or Withdrawals From The Market

A report from Q & Me said that although the trend of growing MT stores is increasing, the fierce competition has led to many M&A deals with large corporations taking place. Besides, some units chose to exit the market.

Along with the fierce competition in the market share of the retail industry, the Auchan chain of French giants developed in 2015 also had to withdraw from the Vietnamese market. After a long, unprofitable journey, the unit decided to sell 18 stores in May 2019 and say goodbye to consumers.

Regarding the shopping trend of users, Q & Me predicts that the MT channel will continue to be popular among upper-class customers, while the GT segment is the first choice of the customers who prefer cheap items.

When the 4.0 era ascended, technology was also used in retail to provide customers with new shopping experiences. In which Vingroup is the most active unit.

In the future, CVS system developers will apply modern technology to open virtual stores to meet customers' anytime and anywhere shopping needs. At that time, users only need to sit in one place to download the App, scan the QR code of the product printed on the catalog, proceed with payment and then wait for the goods to be received.

Learn more: The Ministry of Finance estimates that public debt will reduce to 52.7% of GDP by 2022