Mobile World MWG: October revenue drops to the lowest rate ever since Tet, 10-month Profit after tax increases by 35%

Monday 25, 11 2019
MWG has accelerated the pace of opening new stores, piloting business in the central region right in 2019 and investing in building new warehouses/distribution centers. The logistics system is a necessary foundation and often needs to be prepared months in advance as the chain expands its operations to new provinces. 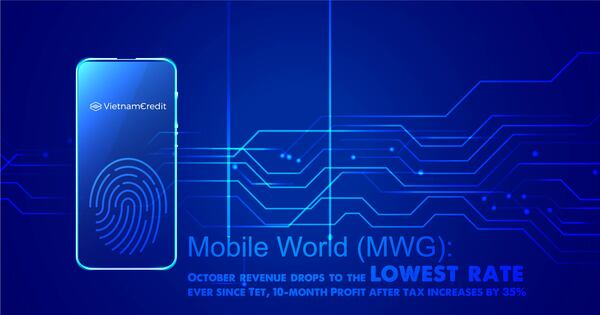 At the end of the first 10 months, Mobile World Investment JSC (MWG) recorded consolidated net revenue of VND 84,723 billion (up 17%) and a profit after tax of VND 3,260 billion (up 35%) over the same period in 2018. Online revenue contributed 13% of the total revenue and grew 11%. Accordingly, MWG has fulfilled 78% of the revenue plan and 91% of the NPAT target for the whole year.

In October alone, MWG's revenue reached VND 7,510 billion - the second-lowest level since the beginning of the year, just over February was the time of the Lunar New Year.

Profit after tax of October alone was VND 284 billion - equivalent to 3 months earlier. MWG currently has 2,812 stores, an increase of 106 stores compared to the end of September. The DMX chain has 30 new stores due to both new opening and conversion, BHX chain adding 78 selling points - bringing the total number of stores to 866. " Super Cheap Phone "has 14 test stores in Ho Chi Minh City. In addition, MWG has completed changing the display for 90 more mini DMX stores in October 2019. By the end of October 31, 2019, MWG had 174 watch shops (compared to 134 at the end of September). There is an accumulation of more than 245,000 watch products sold at Mobile World and DMX stores, contributing more than VND 480 billion to the MWG's revenue.

Since September 2019, when the Company decided to focus on promoting the laptop industry, the total revenue from laptops in September and October has reached VND 715 billion, increase by over 40% compared to the same period of 2018. In 10 months, more than 220,000 laptop products were sold at MWG chains, bringing about VND 2,000 billion in revenue for the company. Regarding the BHX chain, out of 866 stores as of October 31, 2019, there were 452 stores in 20 provinces in the South and South Central regions outside Ho Chi Minh City, with 2 newly opened provinces of Ninh Thuan and Khanh Hoa. By type of store, BHX has 161 large 300m2 stores, accounting for about 19% of the whole chain stores.

The average revenue per store in October reached VND 1.3 billion / month (only stores opened before October 1, 2019). In addition to some objective factors such as unfavorable weather, customers prioritize spending budget for children in the enrollment season, the BHX tightening cancellation rate at the end of September and the first half of October leads to a number of supermarkets lacking goods and a slight decrease in the average revenue per store.

On the other hand, BHX has upgraded 57 well-functioning 300m2 stores into a Double Shop model (combining small household appliances & kitchenware) in October 2019. Sales after the upgrade of these stores recorded an increase of about 20% compared to before. So, along with 6 stores that have been tested since Q2, BHX currently operates 63 Double Shop stores. In this model, small household goods and kitchen utensils contribute about 10% of store sales.

BHX is expected to operate around 1,000 supermarkets by December 2019 and Q4 will focus on purchasing, preparing logistics effectively to serve the 2020 Tet holiday. Thanks to MWG's continuous net profit growth of over 30%, the Company decided to accelerate the BHX chain when it reached important milestones earlier than planned. Specifically, BHX has surpassed 700 stores for the whole year 2019 from August (4 months ahead of schedule) and maintained positive EBITDA at stores (profit before tax, interest, and depreciation).

On that basis, the Company has accelerated the pace of opening new stores, experimenting with business in the central region right in 2019 and investing in building new warehouses/distribution centers. The logistics system is a necessary foundation and often needs to be prepared months in advance as the chain expands its operations to new provinces.
Categories:
Financial News Banking & Finance Economy News