Many Banks Reported Higher Profit Than The Year’s Plan

Monday 23, 12 2019
There are 10 more days to go through 2020, although there are no official results the banks have so far been able to estimate the business results for the year 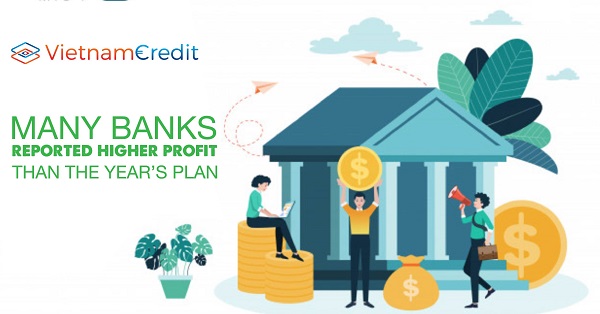 2019 is about to close with a bright picture of the banking industry. In particular, a big bright spot is that many banks continue to "make a profit", with profit results exceeding the targets set earlier in the year.

There are 10 more days to go through 2020, although there are no official results the banks have so far been able to estimate the business results for the year. Recently, many banks revealed that profit this year will certainly exceed the plan set by the General Meeting of Shareholders at the beginning of the year.

Sacombank exceeded the annual plan which was expected earlier. In the first 9 months of 2019, the bank's EBT reached VND 2,491 billion, completing 94% of the target of VND 2,650 billion.

At Agribank, the bank soon completed its plan after the first 10 months of the year. Specifically, by the end of October, the bank's profit reached 10,350 billion dong, exceeding the target of 10,000 billion dong set by Agribank earlier this year. Scale indicators continue to affirm the leading bank in the system: total assets reached 1.4 million billion dong, mobilized capital reached 1.29 million billion dong, outstanding loans for the economy. In fact, the loan ratio for agriculture and rural areas of Agribank reached 68.3%, equivalent to VND 722,039 billion.

Another big bank, VietinBank, also revealed its business results. At the recent meeting with MUFG Bank's strategic shareholder, Mr. Le Duc Tho, Chairman of VietinBank's Board of Directors, said that by the end of 2019, VietinBank will reach or even exceed the annual profit plan that has been approved by the General Meeting of Shareholders.

According to Mr. Tran Minh Binh, General Director of VietinBank, although the year has not ended, the results are quite clear. Nonetheless, the bank will continue to take advantage of the remaining days to further improve the results of the implementation of the planned targets. Specifically, ABBank said that its profit target for this year is VND 1,220 billion before tax, the bank has completed the plan assigned by the Board of Directors, growing by about 30% compared to 2018. ABBank's credit growth in 2019 is at 10%. Previously, according to the announced figures as of the end of November, the bank's profit before tax reached VND 1,107 billion, reaching 91% of the year plan. Total assets reached VND 94,259 billion, an increase of 4,021 billion compared to the beginning of the year.

The two big banks BIDV and VietinBank have not mentioned profit results recently but may continue to be positive numbers. Earlier, during the year, Vietcombank's leaders also repeatedly asserted that exceeding the annual plan with this bank is not difficult. At BIDV, the representative of this bank recently updated some indicators showing that the position of the largest bank in the system continues to be maintained. BIDV's total assets are estimated at 1.4 million billion dong, total outstanding loans are estimated at 1.1 million billion dong, mobilized balance is 1.15 million billion dong.

​Related Post: Which banks are about to finish the year’s plan soon?