Interest rates face upward pressure in the second half of 2020

Thursday 25, 06 2020
In the second half of 2020, deposit interest rates facing pressure to increase are not small, especially for terms of 6 months or more. 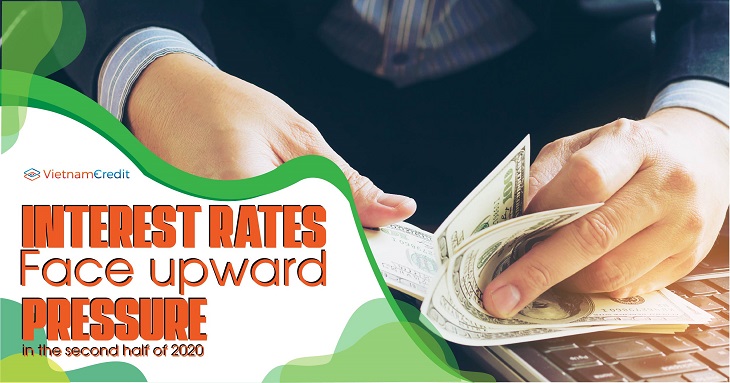 Statistical data from the State Bank of Vietnam shows that every year, the deposits of enterprises into banks often decrease and then increase gradually, at the end of the year, the increase is not much different from the deposits of residents. , even beyond. However, in the 4 months of this year, due to the impact of the Covid-19 pandemic, businesses have sharply withdrawn their deposits from banks (in 4 months, the net withdrawal was over 150,000 billion dong, while the same period last year was over 50,000 billion dong. ), it is most likely to cover business costs in the context of a heavily affected revenue stream. Besides, the sources of people's deposits are also affected. The number of deposits of people in the bank in 4 months of this year only increased by over VND 160,000 billion, while the same period last year increased by more than VND 260,000 billion. In the first 4 months of 2020, total customer deposits only increased by nearly VND 6,300 billion (equivalent to an increase of 0.07%), while the same period last year increased to over VND 200,000 billion (equivalent to an increase of 2.69%). ).

From another perspective, the very slow increase in customer deposits corresponds to less satisfactory credit growth. When the output cannot be increased, the bank is also required to reduce the mobilization of input capital to reduce costs. Demand for capital mobilization is small, capital injection is cheap in the interbank market (interbank interest rates are at a record low level for a long time recently), therefore, mobilizing interest rates for 6-month terms and above up has fallen quite sharply. According to statistics from SSI Securities Company, from the beginning of the year until now, deposit interest rates of major commercial banks have decreased by a total of 0.6-0.75 percentage points with terms of less than 12 months. (about 4-5.5% / year) and decreasing from 0.65-1%% for 12 and 13 month periods (to 5.7-6.2% / year). Reducing interest rates has been a general policy of the State Bank for many years, however, it is not easy to implement. There have been many times this agency actively pumped cheap capital into the interbank market but did not "penetrate" significantly into market 1 (residential market and economic organizations). Meanwhile, lowering the ceiling interest rate for less than 6 month period did not have much impact because the money tending to move to a higher term was not imposed. This is understandable because when capital is hungry, banks still have to raise interest rates at these terms to raise money.

If we look at the above factors, it can be seen that it is too early to confirm that the current interest rate reduction result will be maintained for a long time after the pandemic, especially until the economy of Vietnam, as well as the world, gradually rehabilitated. Because of the peculiarities affected by the Covid-19 pandemic and the recession, the bank is in a rare period of lack of capital. But when the economy recovered, the demand for capital mobilization increased, the pressure to raise interest rates also increased.

The SBV still targets an ambitious 11-14% year-on-year credit growth despite taking into account the impact of the Covid-19 pandemic. This ambition is not difficult to understand, because GDP growth for many years has depended heavily on credit growth. However, as of mid-June, credit growth was only 2.13% compared to the beginning of the year. Thus, the pressure to increase credit in the last 6 months is very large, but not necessarily not feasible because unlike other countries, Vietnam has well-controlled the pandemic since the end of April, an important premise to recover. good in the second half. If the world economic situation gradually improves after the period of social separation, the "door" to increase credit is even wider.

Demand for capital mobilization increased to serve credit growth, creating pressure on the interest rate increase, which is one thing. On the other side, inflation pressure is not small. Even in the context of the economic downturn, the average consumer price index (CPI) in the first 5 months of 2020 still increased to 4.39% over the same period last year, the highest level in the last 3 years. The pressure will be much greater when the economy recovers and as mentioned, the higher the inflation pressure, the greater the pressure to raise interest rates, on the one hand, to maintain positive real interest rates, on the other hand, to absorb money back to reduce inflationary pressures.

In summary, in the second half of 2020, interest rates are facing significant upward pressure, especially for terms of 6 months or more due to no ceiling interest rate.

>> Is reducing bank interest rates really an effective solution for businesses in Vietnam?