Thursday 23, 04 2020
It is hard to believe that the price of any commodity can be negative, but that is what happened to oil prices. 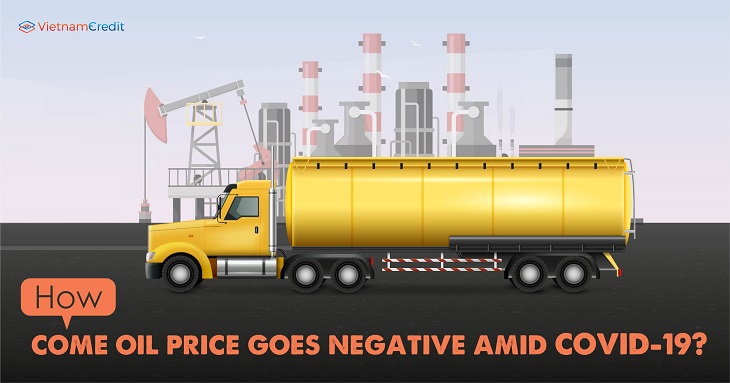 How it has been so far

OPEC and other producers have agreed to cut production by 9.7 million barrels a day. However, that supply cut still came slower than the demand cut, leading to a large oil surplus in the market and a buyer shortage. Oil storage capacity is rapidly depleted.

Many oil-importing countries are storing large quantities of oil, taking advantage of cheap prices to "hold" oil. Some oil producers, in the hope of maintaining their market share, have stored excess oil at sea, hiring oil tankers at high costs.

Some are believed to be paying more than $ 100,000 per day for each tanker. So, how can oil prices in Alberta, and even future prices for West Texas Middle (WTI) be negative? The event started with a fall in futures contract prices for WTI (the future contract prices mean that oil will be traded after a few months at today's prices).

This price fell by 6 USD / barrel on Monday, reaching the threshold of 11.66 USD. However, by the end of the day, the price of the WTI contract in May fell to -37 USD, as buyers were simultaneously selling before the oil was actually delivered and had nowhere to store.

However, Alberta oil, primarily derived from Western Select, is usually sold at 10-15 USD less than the price of WTI, because it must be extracted from shale terrain. That makes the extraction more difficult, and it must also be transported thousands of kilometers to American refineries.

Therefore, the price of oil in Alberta is negative, because the current benchmark price is lower than the cost of production, transportation, and storage.

What needs to be done in the future

This situation could not last. Manufacturers, in the short future, can accept prices below their variable costs as long as they can pay some fixed costs. As time goes on, more and more rigs will stop working (technically, a few will be maintained to avoid being compromised) and a new balance between supply and demand will be established at prices that exceed the average total cost, but this is not good for both Alberta and the United States. Alberta oil is currently the damage of the oil war between Russia and Saudi Arabia, with COVID-19 exacerbating that situation. Either of these factors may have disrupted Alberta oil production. However, the animosity between Russia and Saudi Arabia combined with the global pandemic has been proven catastrophic for Canada, and the US energy industry may face similar outcomes.

It is hard to believe what either of these two countries could do at such a low price. Russia needs a price of 60 USD / barrel to balance the government budget and even a higher price to balance between the current import and export.

Saudi Arabia, still the lowest-cost oil producer in the world, can only make money when the price per barrel is over 20 USD. In the case of Russia, the price must be 40 USD. That is still not enough. Saudi Arabia needs a price of 80 USD per barrel to balance the budget, realize plans to diversify the economy and maintain the flow of subsidies to the economy.

Besides, the balance also plays an important role in stabilizing the political system of Russia and Saudi Arabia.

​>> How does the negative oil price due to COVID-19 affect the Vietnamese economy?