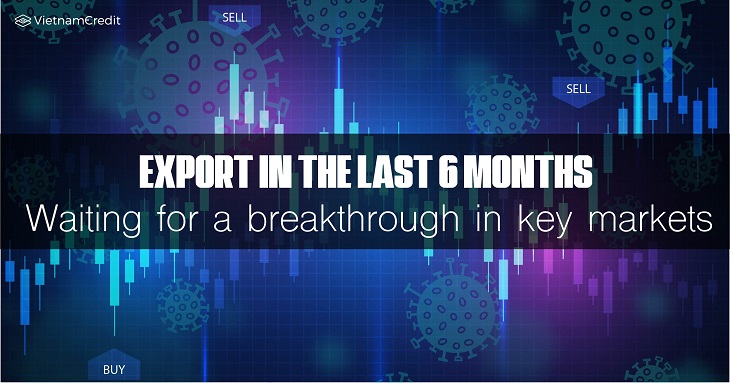 Looking back the first six months of 2020

Under the current conditions, import/export continues to play an important role in the economy. The statistical indicators show that export/import turnover, trade surplus of goods in the first 6 months of 2020 are as follows Regarding import/export and trade surplus of goods in the first 6 months of this year achieved two outstanding results.

The trade surplus is achieved due to many factors. In general, the export turnover is larger than the import turnover ($121.21 million compared to $117.17 million ); Compared to the same period last year, exports fell less than imports (down 1.1%, or down $1.35 billion, compared with 3% reduction or $3.62 billion).

By region, the foreign-invested sector (including crude oil) continues to have a large trade surplus in absolute turnover ($ 14208 million), both in trade surplus (17.8%) - not only offset the trade deficit of the domestic sector but also helped the whole country trade surplus.

By group/commodity, among the 35 major export items, detailed statistics over the same period last year, there were 13 items of increase, of which some items had a large increase (over $100 million), the largest. are Computers, electronic products and components, Machinery, equipment, tools, spare parts, followed by toys, sports equipment, and parts; Precious stones, precious metals and products, Rice, Furniture made of materials other than wood, Wires, Cables, Wood and wood products, Paper and paper products.

Just over half of the time, there were 22 items reaching over $ 1 billion, of which 5 items reached over $ 5 billion (the largest were Telephones and components, followed by Computers, electronic products, and components, accessories, textile, machinery, equipment, tools, spare parts, shoes).

According to the market, among 85 major markets with detailed statistics in the five months of export increased by 25, a good increase (over $100 million) was 5 markets: China, the US, Hong Kong, Taiwan, and Mexico. Just over 5 months, there have been 25 markets reaching over 1 billion USD, of which 5 markets reached over 3 billion USD (USA, China, Japan, Korea, Hong Kong). Among 85 major markets in 5 months, Vietnam had a trade surplus of 53, of which over 1 billion USD had a trade surplus, including 9 markets: USA, Hong Kong, Netherlands, England, Germany, Cambodia, Canada, Austria, and United Arab Emirates. The trade surplus has had a positive effect on many fronts. The most direct one is contributing to improving the balance of payment, contributing to increasing foreign exchange reserves, stabilizing the VND / USD exchange rate (after 6 months, increasing 0.47%, the average of 6 months increases 0.12% compared to the same period. period).

There is an impact not many people realize is that trade surplus has an impact on economic growth in the context of accumulating assets and final consumption in the country is still weak compared to production. The increases in exports and import restrictions will have the effect of "stimulating supply" - stimulating domestic production. If the world trade dropped, which led to the forecast that global economic growth would fall deeply, then in Vietnam, there would still be trade surplus, so economic growth would slow down rather than be negative.

The export market is clearly differentiated

According to the preliminary statistics released by the General Department of Customs, in June 2020, Vietnam's export turnover reached over $22.56 billion, up to 17.6% over the previous month. This figure far exceeds the forecast of $21 billion issued by the General Statistics Office at the end of last month. With the growth rate of export turnover, which is increasing steadily through each month (June increased by 17.6%; May increased by 9.1%), if the economic recovery rate is maintained, the export will have room for developing better in the last months of the year.

According to the Ministry of Industry and Trade, Vietnam's export market has tended to differentiate quite clearly. Specifically, major and traditional markets such as China and the US grew relatively well, at 17.4% and 10.3%, respectively, compared to the same period last year. The market of CPTPP and some other countries also grew positively. And negative growth is focusing on ASEAN, Japan, and the European Union (EU). These also point to be noted in the upcoming big export and integration orientations.

However, as Minister of Agriculture and Rural Development Nguyen Xuan Cuong assessed, in the last 6 months of the year, there are still major challenges when the Covid-19 pandemic has not ended and is very complicated, so this is a problem. Export markets will be very difficult. Along with that is the story of trade protection which makes it difficult for Vietnamese enterprises to access the market.

To ease the flow of exports, Mr. Tran Tuan Anh - Minister of Industry and Trade, will ensure centralized handling of outstanding issues with Vietnam's key export markets. For the US market, focusing on dealing with shortcomings in trade, services, and trade in goods. For the Chinese market, accelerate the opening of this market with a number of products, especially agriculture.

At the same time, the Ministry of Industry and Trade will work with the Ministry of Foreign Affairs, the Ministry of Agriculture and Rural Development in coordination with the Chinese localities to facilitate the clearance of goods, especially agricultural products, and fruits. Next is the good handling of the story of the fight against origin fraud. This is the key content in issuing upcoming guidelines, especially regarding EVFTA Agreement which will come into effect from August 1, 2020.

For the US market, the most important is to keep abreast of the evolution of the election situation, the epidemic situation and the situation that the United States receives requests for anti-dumping, anti-subsidy investigations for automobile tires and initiated tax evasion investigations for plywood and steel sheets in Vietnam to have appropriate solutions. Particularly, attention should be paid to resolving and resolving a number of trade-and-service issues which are currently stuck at the request of the United States. Specifically, there are issues that exist in the revision of the law on cybersecurity, digital economy, information, communication, advertising, etc.

For the European market, the Director-General of the Department of Trade and Services Statistics, General Statistics Office Nguyen Viet Phong said that in the first 6 months, the export turnover of goods from Vietnam to the EU has decreased by 8.8%. Putting this number in the context of the upcoming EVFTA shows that this is a pity. In addition, export turnover to this market in 2019 only accounts for 17.5% of the total turnover of Vietnam, showing that there is plenty of room for Vietnamese goods to EU and can be promoted in 6 months. year-end when EVFTA takes effect.

But the immediate challenge is not small when the EU is a fastidious market, so the requirements of technical barriers, food safety and traceability with agricultural products or rules of origin with textile products, leather shoes ... must be strictly adhered to. Along with that is the pressure to compete with EU goods and challenges against trade remedies.

Therefore, the Ministry of Industry and Trade and other ministries and industries need to focus highly on the implementation of EVFTA to effectively exploit the benefits brought by this agreement. In the immediate future, it is necessary to finalize and submit to the Government for consideration through the Government's Action Plan on the implementation of EVFTA to promptly promulgate right at the time this Agreement takes effect; prepare necessary conditions, proactively deploy plans and solutions to export goods to the EU market after EVFTA takes effect. Along with that is strengthening the dissemination and guidance to localities and business communities about EVFTA.