Andrew Jeffries, ADB's Country Director in Vietnam, said that Vietnam is among few countries that could successfully control the epidemic. However, Vietnam is not exempt from the negative impacts caused by Covid-19. 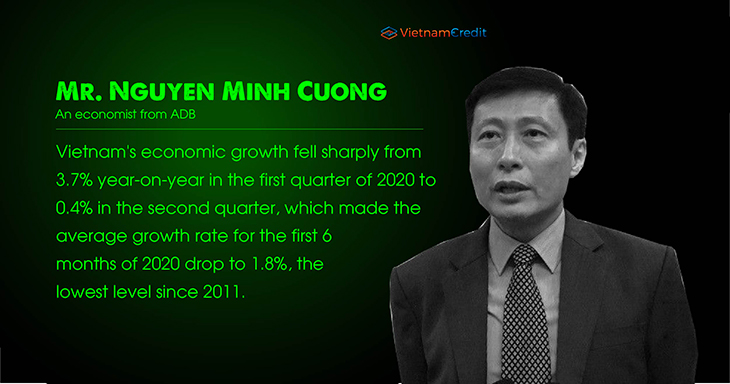 Mr. Nguyen Minh Cuong, an economist from ADB informed that Vietnam's economic growth fell sharply from 3.7% year-on-year in the first quarter of 2020 to 0.4% in the second quarter, which made the average growth rate for the first 6 months of 2020 drop to 1.8%, the lowest level since 2011.

In particular, growth in the service sector decreased from 6.7% in the first 6 months of 2019 to 0.6% in the same period this year as the number of foreign tourists decreased by 56%. Domestic tourism began to recover in May and June, then was halted in July due to the re-outbreak of Covid-19.

ADB's Country Director in Vietnam commented: “Declining domestic consumption and weakening global demand due to Covid-19 have affected the Vietnamese economy more than expected. However, the country’s economic growth in 2020 will remain positive, largely thanks to the Government's success in controlling the spread of Covid-19. Economic growth will be supported by macroeconomic stability, increased public spending, and ongoing reforms aimed at improving the business environment”.

The global recession and unfavorable domestic conditions, especially high unemployment rate and a dramatic decline in consumption, have hurt the economy more than expected. The economic outlook is also threatened by an increase in new Covid-19 cases since the end of July 2020. Hence, the growth forecast for 2020 has been adjusted from 4.8% in the first ADO Report for 2020 to 1.8% in the most updated ADO Report.

There will still be a trade surplus

ADB said the Vietnamese economy will benefit from the ongoing production shift from China to neighboring countries (including Vietnam), the recovery of the Chinese economy, and the EVFTA. Low growth will restrain inflation at 3.3% in 2020 and 3.5% in 2021. Domestic consumption is forecasted to remain low. Although retail sales recovered in July and inflation was low, consumption would be constrained by falling household and business incomes, rising unemployment rate and more business temporarily suspending operation.

Investment prospects are not positive. Private investment remains low and trade-related foreign investment continues to decline. However, the acceleration in public investment in the second half of 2020 will make up for these weaknesses.

In addition, ADB said that the current account surplus of Vietnam is projected to drop to about 1.0% of GDP in 2020 and recover slightly to 1.5% in 2021. Although exports will decline in the last months of the year, imports are expected to decline even more, which will lead to a positive balance of trade.

However, this surplus does not mean that the economy is in a healthy state as it arises from both declining production and demand. Meanwhile, what makes the current account decrease is remittances, which is forecast to drop 18.0% in 2020.

Mr. Nguyen Minh Cuong believed that the economic outlook for Vietnam in the medium and long term is still very positive. Vietnam's participation in a large number of bilateral and multilateral trade agreements will help the country's economy recover. Vietnam is also likely to benefit from the current shift of supply chains.

However, there still exist many other threats and challenges that can weaken Vietnam’s economy. And the long-lasting Covid-19 pandemic in the world remains the greatest threat to Vietnam's growth prospects for this year and the years to come. Global trade tension is among other threats, according ADB. This will lead to increased trade protectionism and financial risks that could be exacerbated by a prolonged pandemic.

Forbes Vietnam has just released the list of the 10 most valuable brands...