Tuesday 12, 11 2019
Sharing at the seminar "Motivation for Vietnam's economy: Perspectives and prospects" held by the Central Institute for Economic Management (CIEM) 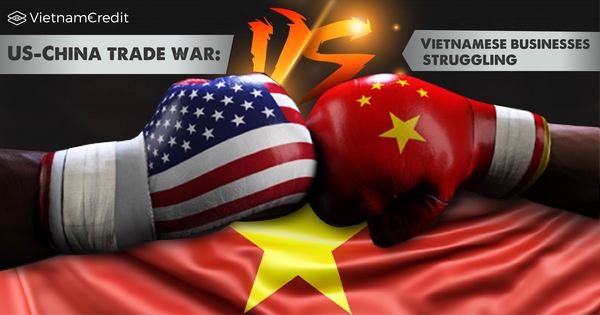 Many businesses said that they had petitioned to the Ministry of Industry and Trade and the Government to take measures to remove difficulties for production, business activities and export in the context of fierce competition and the impact of US-China trade war.

Struggling because of the war

General Director of a large Ho Chi Minh City-based petroleum enterprise said that many domestic companies are greatly affected by the US-China trade war without an effective coping plan. According to him, so far, the production of many businesses in the field has declined, causing transport and automobile companies to reduce transportation activities. The fuel sales statistics of the corporation show that many manufacturing enterprises reduce up to 30% of goods transported to the border as well as export, making the sales of petroleum enterprises also decline.

Along with that, in retaliation to the US, China has increased import duties on ethanol, forcing the United States to shift the volume of goods being sold from the world's most populous market to Southeast Asian countries, leading to a sharp drop in selling prices. In addition, China boosted the import of cassava raw materials from Vietnam, making ethanol producers trapped in a dilemma as import ethanol prices fell while domestic cassava raw material prices increased due to China increasing imports.

“Many members of our corporation have experienced a 30% decrease in oil sales in the past months as a result of this trade war. The impact from the increase of China's ethanol tax also makes domestic ethanol producers fall into flux” he said.

The research figures of the Ministry of Industry and Trade also show that while by the middle of 2018, many large enterprises in the industry had received orders for the whole year, now orders only come with small quantity on a monthly contract. Most purchasers have expressed concern that the US-China trade war will escalate, so they split orders instead of placing large quantities like in the previous years.
Mr. Truong Van Cam, Vice Chairman cum General Secretary of Vietnam Textile and Apparel Association, said that the current decrease in export orders is quite common. The number of orders only equals to about 70% of the same period in 2018 due to the impact of the US-China trade war.

Companies in fertilizer industry said that they are facing many difficulties because of the declining business situation. Data of Petrovietnam Fertilizer & Chemicals Corporation (DPM) shows that in the past 3 quarters, the corporation recorded net revenue of VND 5,398 billion, down 22.6% compared to the same period last year. Along with that, its profit after tax also decreased 73% over the same period, reaching VND 152 billion. Bad weather and sharp drop in sales in the third quarter were the main reasons for the dramatic decline in profits, dragging down the 9-month business results.
Unfavorable business situation was also recorded at Binh Dien Fertilizer Joint Stock Company (BFC) when after 3 quarters, the company's revenue reached VND 4,565 billion. Profit was only VND 55.4 billion, down 72.7% compared to the same period last year. Southern Fertilizer Joint Stock Company (SFG) has been an even more difficult situation when the profit in the third quarter of 2019 and in 9 months recorded a loss of VND 4.3 billion and VND 8.9 billion respectively.
Mr. Nguyen Tien Cuong, General Director of Vietnam Apatit Company (Apatit), said that the reduction in revenue and exploitation resulted in a 15% reduction in the average income per employee of the company. Reviewing the role of FDI companies

Sharing at the seminar "Motivation for Vietnam's economy: Perspectives and prospects" held by the Central Institute for Economic Management (CIEM) in late October, Mr. Nguyen Anh Duong, Head of the General Research Department (CIEM) ), said: Although Vietnam's economic growth is relatively high compared to other countries in the region, the potential GDP growth is still in a downward trend. Vietnam's economy currently faces the challenge of inadequate growth quality. In addition, in the context that Vietnam is becoming an investment destination thanks to the participation in many free trade agreements (FTAs), it is necessary to pay attention to the activities of FDI enterprises as well as policies for attracting FDI in the coming time.

Dr. Nguyen Dinh Cung, former Director of CIEM shared the same opinion. “Export in the first 10 months increased by 7.6%, of which exports to the US market led with an increase of 26.6%, Japanese market increased by 7.5%, South Korea increased by 9%. Notably, exports to the EU market fell 1.9%, China fell 2.9%, showing a huge risk for Vietnam. It is necessary to manage FDI inflows in order not to exceed the absorption level of Vietnam", Mr. Cung said.
Categories:
Financial News Banking & Finance The US-China Trade War