Wednesday 27, 11 2019
On the afternoon of November 26, the French Embassy in Hanoi officially issued a notice on granting visas for Vietnamese citizens to enter the EU. Accordingly, nothing has changed at the moment. 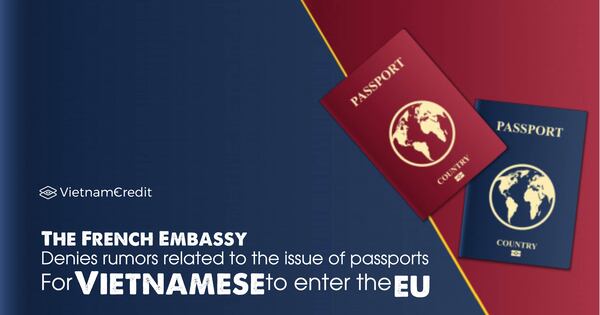 The French Embassy in Vietnam also emphasized that the consultation procedures related to granting Schengen visas for Vietnamese citizens have not changed. This procedure has been prescribed for many years. This is a common procedure in the overall visa application process.

"It is reiterated that the time to verify the visa application to France in Vietnam does not exceed 15 days following Schengen regulations," the French Embassy said. Earlier, on the social network, Vietnam was listed as a list of countries restricted from issuing visas to the European Union (EU). According to this false information, Vietnamese citizens who apply for a visa at the diplomatic office of a Schengen country will have to get the consent of the rest of the bloc to be able to get a visa.

The cause of the rumor is believed to have originated after 39 Vietnamese citizens were killed in a container on their journey to the UK illegally. Currently, the authorities of the two countries are coordinating to promptly return the bodies of the ill-fated Vietnamese.

The Schengen visa has been applied by the EU since April 2017 until now. Accordingly, countries must update the visa information of guests to the common system for the Schengen countries to respond. Only after 26 EU countries have agreed, will they be granted a visa. This visa is completely unrelated to the case of 39 Vietnamese killed in the UK.

Meanwhile, the UK is not in the Schengen area, so it does not participate in voting for border control. Along with that, a Schengen visa does not help one person gain entry to the UK like 26 countries in the bloc.