E-commerce industry: ready for the boom

Tuesday 19, 11 2019
Although it has only been developed in recent years, the e-commerce industry in Vietnam is creating a boom that has surprised many people. However, the current growth rate is still quite low compared to the industry's capacity. 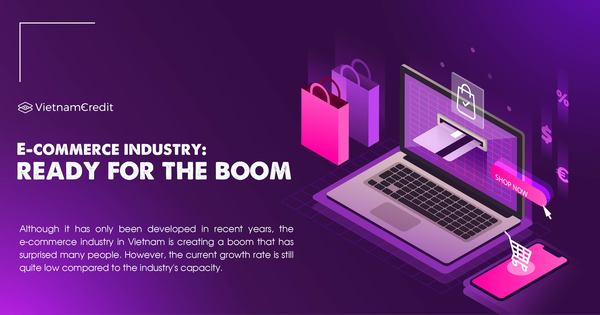 In fact, e-commerce is an inevitable business and consumption trend which is associated with the development of technology and the service response from businesses to the needs of consumers. Currently, the number of people participating in online shopping in Vietnam has increased steadily and reached 40 million people. Which means 1 in 2 people participate in cyber purchase. However, the proportion of revenue from this sector compared to the retail level across the country was only 4.2%.

As of 2019, there have been 61 million Internet users in Vietnam. A Vietnamese on average spends 3 hours and 12 minutes using the Internet on mobile devices such as smartphones. This is an advantage of Vietnam's market to attract international investors. Vietnam has become the 3rd largest recipient of investment capital in the region, with USD 600 million from 2018 to the first half of 2019.

Investments in MoMo, Sendo, Topica from international investors have contributed to making Vietnam become a destination of choice for foreign investors. The country is also being considered as one of the most potential and fastest-growing e-commerce markets in the world.
According to Mr. Stephen Kuo, Asia-Pacific Regional Director of Alibaba, Vietnam has many underlying advantages to develop e-commerce including being a developing economy, maintaining stability, having a large population with a young population structure. In addition, the number of small and medium enterprises is also relatively large with about 500,000 enterprises, which have might be able to develop diverse production areas. Mr. Stephen said that if the current average growth rate of 25-30% is maintained, Vietnam e-commerce market size will be ranked 3rd in Southeast Asia, following Indonesia and Thailand by 2025. The e-commerce whitepaper 2018 issued by the Department of E-commerce and Digital Economy (Ministry of Industry and Trade) recently showed an unexpected figure when in 2018, Vietnam's entire e-commerce industry was worth USD 8.06 billion, up 30% compared to 2017, including goods and services.

Accordingly, 36% of businesses participating in the survey said that they conducted sales on social networks (up 4% compared to 2017). At the same time, the proportion of enterprises that believed sales through social networks was highly effective was at 45% (a climb from 39% in 2017). 32% of them thought that sales through website was effective while 22% agreed on the effectiveness of mobile apps. Many large businesses have also actively used social networks to promote and take care of customers. This is a good sign for the e-commerce industry in Vietnam, when business activities and online transactions with modern technology are gradually replacing traditional forms of trading.

In fact, the potential of e-commerce in Vietnam is huge but many small and medium-sized enterprises have never heard of and known how to take full advantage of e-commerce. Statistics show that all businesses selling goods on e-commerce platforms have their own websites, but only about 61% of them have developed mobile applications.

According to the digital economy report conducted by Google, Temasek and Bain & Company, in Vietnam, only 1 out of 5 small and medium-sized businesses has an online presence. Even e-commerce giants are still struggling to see clear growth.
The graph about website traffic of the top 4 e-commerce platforms from Q3/2018 to Q3/2019 shows that except for Sendo, which saw a steady increase, traffic to others mostly decreased on a quarterly basis. Shopee remained the leading position in the third quarter of 2019 when Tiki jumped from the second position of the previous quarter to the third position, giving way to Sendo; Lazada fell from third to fourth place.

The cause of the small and medium-sized enterprises in Vietnam being “lazy” in e-commerce business activities and the struggles of the giants in the field largely come from consumers' confidence in online shopping. 5 out of 10 online shoppers surveyed said that they were dissatisfied with cybershopping.
Another reason behind the fact that e-commerce has not developed to its potential is logistics service. Last-mile delivery is still limited. Additionally, lack of uniformity in legal policies also poses challenges. E-commerce policies in Vietnam have so far only applied in major cities including Hanoi, Ho Chi Minh City and some dynamic provinces.

Mr. Bui Huy Hoang, Deputy Director of the Center for Digital Informatics and Technology, Department of E-commerce and Digital Economics, said that in order to develop e-commerce in a sustainable manner, in addition to perfecting the shortcomings, many measures to support businesses and ensure trust for consumers are needed.
Source: Tapchitaichinh
Categories:
Financial News Economy News Doing Business In Vietnam