Banks with "foreign factors" are indifferent to the savings interest rate race? 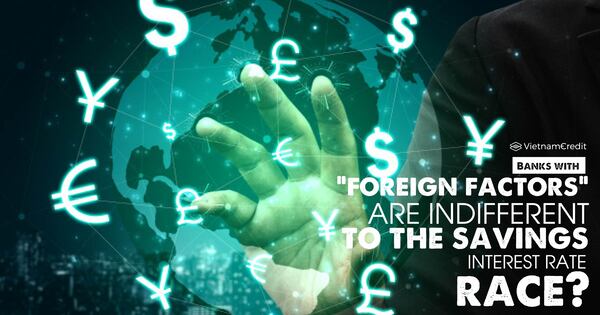 Currently, there are 9 banks with 100% foreign capital in Vietnam, which are HSBC, Shinhan Bank, Woori Bank, Standard Chartered Bank, ANZ, UOB, Hong Leong, Public Bank and CIMB together with 2 joint venture banks, Indovina Bank and Vietnam Russia Joint Venture Bank (VRB). However, at the end of 2017, ANZ sold the retail segment to Shinhan Bank.
Observations on the market show that individual deposit interest rates at these banks are strongly differentiated. While some banks are trying to attract customers with attractive interest rates others are not interested in listing modest interest rates, even approximating demand deposit interest rates. Remaining banks have high interest rates, competing with domestic banks. For example, VRB listed interest rates up to 5.5% / year - equal to the ceiling interest rate term of 1-3 months as prescribed by the State Bank. Keeping the peak rates are 2 other banks: Indovina Bank (3-month term) and HongLeong Bank (1 and 3-month terms). Following closely was Public Bank with 4.8% - 5.3% and CIMB Bank with 4.7% - 5.1%. 6-month term interest rate
For 6-month term deposits, the survey showed that most interest rates of foreign banks are lower than domestic banks.
The lowest is still HSBC Vietnam, at 1.75% / year. At Standard Chartered, the 6-month interest rate remained at 2.87%, equal to the listed interest rate for 3-month terms.
The two joint venture banks, Indovina Bank and VRB, apply higher interest rates than 100% foreign-owned banks when listing 6-month interest rates at 6.7% / year and 7.3% / year.
Among the banks with 100% foreign capital, Public Bank listed the highest interest rate, at 6.6% / year. Holding the second position is CIMB Bank with 5.7%. Some other banks such as Shinhan Bank, Woori Bank, UOB, Hongleong Bank have listed interest rates from 4.45% - 5.2%.
Terms of 1 year or more
Similar to the short terms, the interest rate of mobilizing capital for terms of 1 year or more also had a strong differentiation among banks.
The bank with the most competitive interest rate continues to be VRB. This bank is posting interest rates for 12- and 13-month terms of 7.7% / year and from 7.1% - 7.5% / year for terms of 15, 18, 24 and 36 months. It is followed by Public Bank and Indovina Bank with 7.6% / year and 7.5% / year for 12-month deposits; over 12 months from 7.6% to 7.8% / year depending on the term.
These are not only the top high interest rates in the group of banks with foreign elements in Vietnam, but also higher than the equivalent interest rates at many domestic banks such as Vietcombank, Agribank, Vietinbank, BIDV, Techcombank, Sacombank, MBBank, VietABank, HDBank, SHB, and OceanBank, etc.
CIMBBank and UOB are also two listed banks with high interest rates in these medium term, ranging from 6.1% to 7.0% per year.
Outside of the medium and long-term capital mobilization race at the end of the year, HSBC or Standard Chartered has very low interest rates, respectively 2.75% and 2.87% per year. This interest rate is even half of Hongleong Bank's 1-3 month deposit interest rate. Interest rates at some banks have changed slightly compared to September
Observations show that, compared to September, interest rates at foreign banks were generally unchanged, only a few banks have changed such as Standard Chartered, Shinhan Bank and Public Bank.
The latest interest rate table listed on October 25 at Standard Chartered shows that banks reduce 1-month interest rates from 1.95% to 1.3%, the interest rates for over 1-year terms are listed by banks at 2.87% instead of 2.92% and 3.02% as before. In particular, the interest rates for 6 and 12 month terms were pushed up to 1.07 percentage points, specifically from 1.8% and 1.6% to 2.87%.
Previously, on October 15, Shinhan Bank also applied a new saving rate schedule, but only changed the 1-month term interest rate from 3.6% to 3.5%.
Although Public Bank has reduced interest rates for terms of more than 1 year from 8% to only 7.6% - 7.8%, it is still a foreign bank that is applying the most attractive interest rates for long term deposits.
As can be seen, most foreign banks have much lower interest rates when compared to domestic banks. This is understandable because the strategy of foreign banks does not focus too much on price competition but focuses on improving the quality of services to meet the rigorous demands of customers when their target is mainly the group of customers. goods with high income and care more about service quality than price.
SROUCE: CAFEF
Categories:
Financial News Banking & Finance Economy News