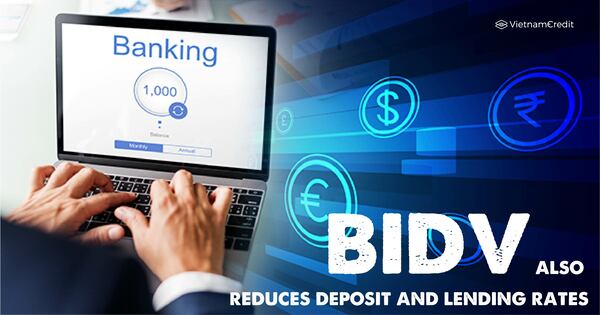 Late in the evening of November 19, the Bank for Investment and Development of Vietnam (BIDV) issued information saying that right at the beginning of the morning of November 19, 2019, BIDV has directed the entire system to seriously implement the State Bank of Vietnam (SBV) 's regulations on reducing the ceiling interest rate for mobilizing capital and lending for priority subjects under Decision No. 2415 / QD – NHNN and Decision No. 2416 / QD – NHNN. At the same time, they have also installed the program to ensure compliance with the regulations of the State Bank (ceiling interest rate of VND deposits: for non-term and less than 1 month term, the maximum amount is 0.8% / year, and for term from 1 month to less than 6 months, the maximum amount is 5.0% / year; The maximum interest rate for short-term loans in VND is 6.0% / year.

In addition, with the responsibility of the State Commercial Bank in implementing the Government's policy of reducing interest rates to support enterprises with appropriate loan costs to promote economic development, BIDV has continued to adjust the deposit interest rates by 0.2% / year for all terms (lower than the ceiling interest rate prescribed by the State Bank). The bank said that the reduction of deposit interest rates is the basis for BIDV to further reduce lending rates by 0.2% - 0.5% per annum over current interest rates and maintain policies for loans to priority subjects of up to 5.5% / year (which is lower compared to the newly adjusted regulations of the State Bank of 0.5% / year) for priority areas that satisfy BIDV's lending conditions, including: (i) Implementing the business plan of export goods in accordance with the Commercial Law and its guiding documents; (ii) Developing supporting industries under the Government's regulations on supporting industry development; (iii) Serve the business of high-tech application enterprises in accordance with the Law on High Technology and its guiding documents.

This interest rate reduction action is a practical action, demonstrating the role and responsibility of BIDV in the implementation of the guidelines and operating policies of the Government and the State Bank for the national development.
Categories:
Financial News Banking & Finance Economy News