3 signs of the global recovery after COVID-19

Thursday 14, 05 2020
According to Yahoo Finance, a new world is emerging with early indices showing that enterprises are recovering, given that it is still at a weak and slow pace. Talking about COVID-19, the world is divided into 3 flows of opinions.

On one hand, the world is filled with immensely terrible microeconomic indices which continuously threaten investors. For example, the US economy lost up to 20.5 million jobs in April alone. The unemployment rate rose sharply to 14.7%.

Most experts, including Fed Chairman St. Lous James Bullar, recently have declared forecasts of the worst things that may happen in the future. Besides, there is also bad news regarding the US business community. Neiman Marcus and J Crew have recently filed for bankruptcy due to them being drowned in debts and their shops being closed because of the pandemic. J.C. Penney is expected to do the same thing in the near future. The Quarter I business result report season is filled with comments on broad layoffs, business plan adjustment announcement, and ways to mobilize more cash to help businesses survive COVID-19.

However, the stock market has ignored all this bad news. The S&P 500 has risen by about 23% from its lowest point in March. According to Yahoo Finance, a new world is starting to emerge, with early indicators showing that businesses are slowly recovering, even though the recovery momentum is weak and slow.

China was the first place to implement blockade measures and also the first country to reopen on a large scale, so it is still considered a "barometer" to show how the recovery of economies will be after the blockade is lifted. Kevin Jacobs, CFO of the Hilton hotel chain, said booking rates in China had been up slightly from the worst period of the crisis.

During the International Labor Day holiday, at 150 hotels of the chain in China, the average booking rate had increased by 50%. In addition, work at new hotel projects had also been restarted. At Marriott, reservation rates at more than 340 hotels in China increased from 10% in February to 25% in April, according to CEO Arne Sorsenson. Of course, these numbers are not enough to celebrate with, but that is enough evidence to show that the tourism industry is slowly recovering and not all customers are deterred from travel.

In March, fast food restaurants suffered heavy losses because people were indoors and also opted for more packaged foods to save money. However, fast food spending has started to rise again, thanks to restaurants optimizing food delivery services and people starting to return to work. Wendy's revenue dropped only 10% in the week ending on April 26, compared to a 30% drop in the last week of March. Dunkin Brands US's sales decline also fell from 35% at the end of March and early April to 25% for the week ending on April 25. In particular, Wingstop's revenue increased by 33.4%. 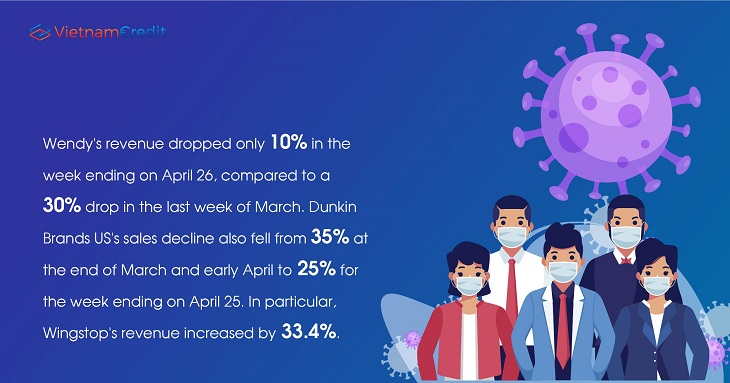 Given that the US unemployment rate could reach 20% in May, no one seems to want to buy a new car. The number of vehicles (both new and old) sold in the last 10 days of April decreased by 19%, better than the reduction of up to 52% in the first 10 days of the month, according to AutoNation data. This figure makes some people think about the demand recovery in the US market in particular and the international market in general. "We think it will be good if China rebounds in a V-shape, but that is unlikely to happen.

And the North American market, especially in the US, has shown signs of recovery and there are many signs that the US market is not falling as badly as China, "GM CEO Mary Barra said. The world economy has made a few small steps, but even small is better than nothing, and people should still be optimistic about that.